Home » Recipes » No-Bake Desserts
This post may contain affiliate links that we collect a share of sales from. Click here for more details.
27.4K shares
Jump to Recipe 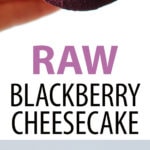 This raw cheesecake features three delicious layers. A sweet, tart top layer made from blackberries, a rich, creamy middle layer made from cashews, and a sweet, nutty crust made from walnuts and dates. Even if you’re not sure about raw vegan cheesecake, trust us (we tend to prefer our food cooked too), this blackberry cheesecake is one raw food you’ll love! 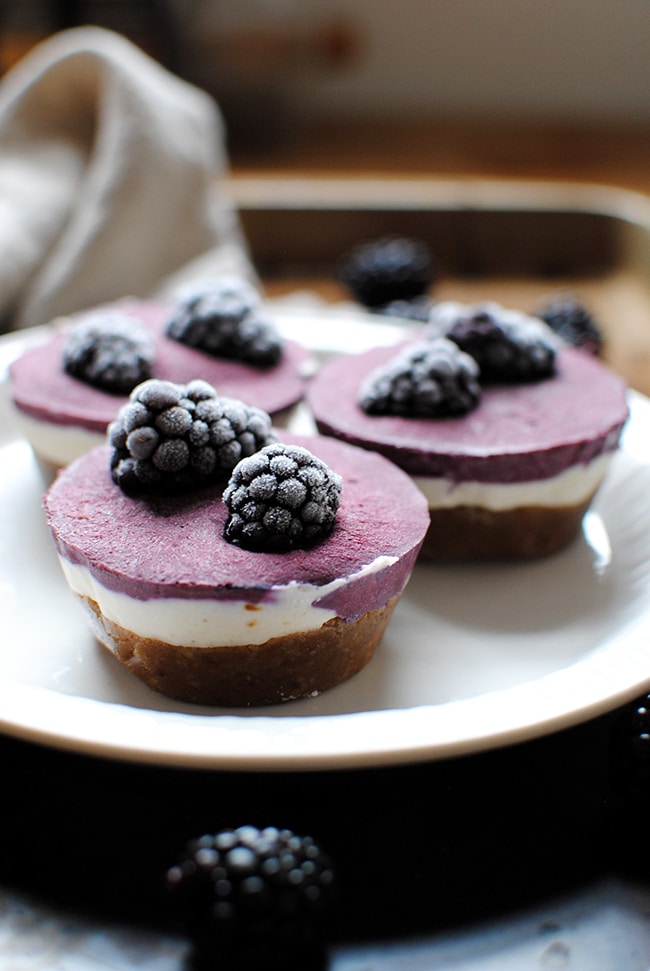 I’d been wanting to make a raw dessert for a while, and I loved the idea of making mini, bite-sized cheesecakes, so instead of creating one giant cake, this recipe creates 12 mini “personal-sized” cheesecakes each slightly smaller than a cupcake.

Although, let’s be honest, any cheesecake can be personal-sized is you try hard enough. 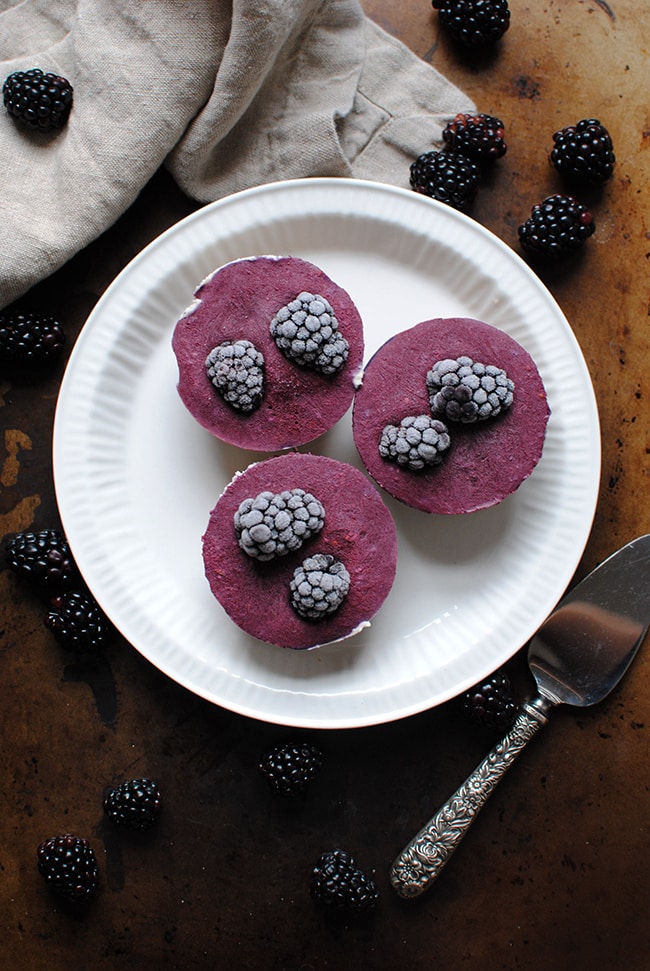 How to Make Raw Blackberry Cheesecakes

This cheesecake recipe has three layers. You’ll create each separately and freeze each layer before adding the next. Before beginning, cut thin strips of parchment (about 1/2″ wide by 5 inches long) and lie inside each muffin cavity so the ends are sticking out on either side. These will make it easier for you to remove the mini cheesecakes from the pan.

You’ll also want to soak your cashews ahead of time for at least an hour. This will allow them to soften and transform into that creamy filling when you blend them. 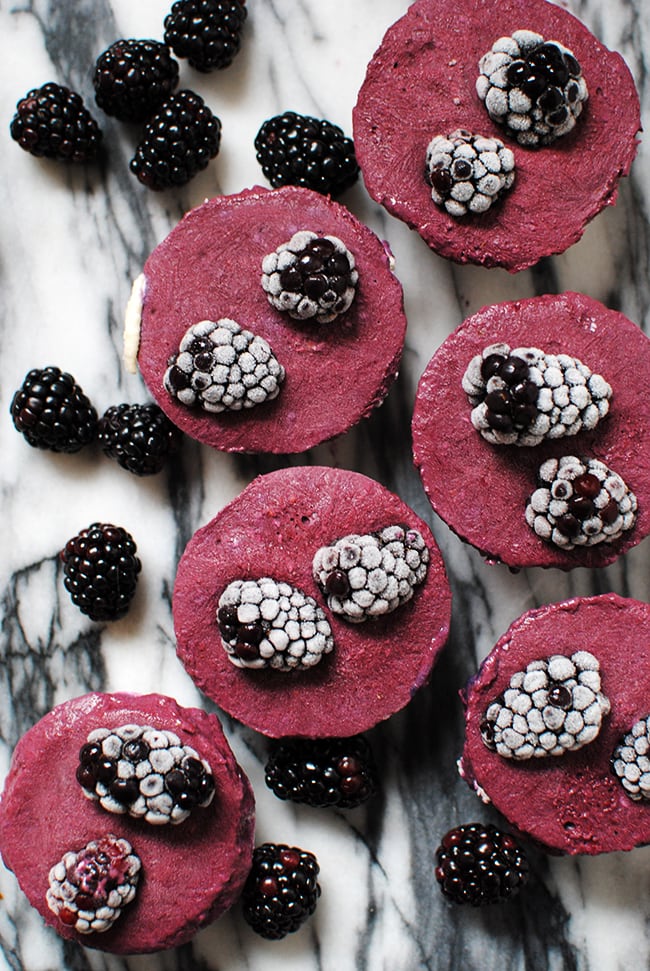 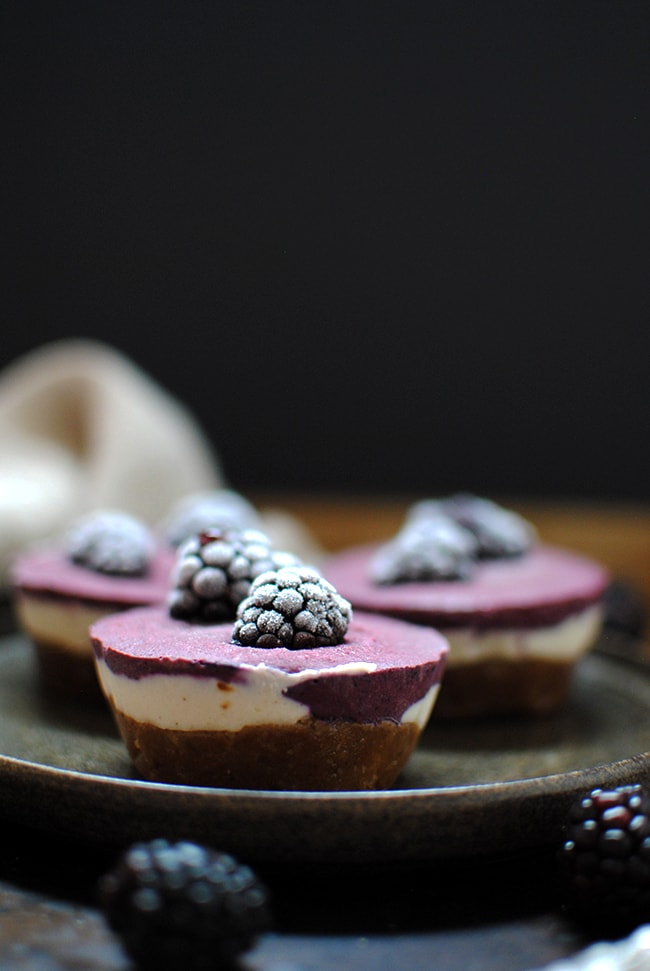 First, let’s take a moment to be thankful that raw desserts are no longer just made with tofu. Can you imagine trying to convince a not-so-adventurous eater to try a tofu cheesecake? Yeah, good luck. 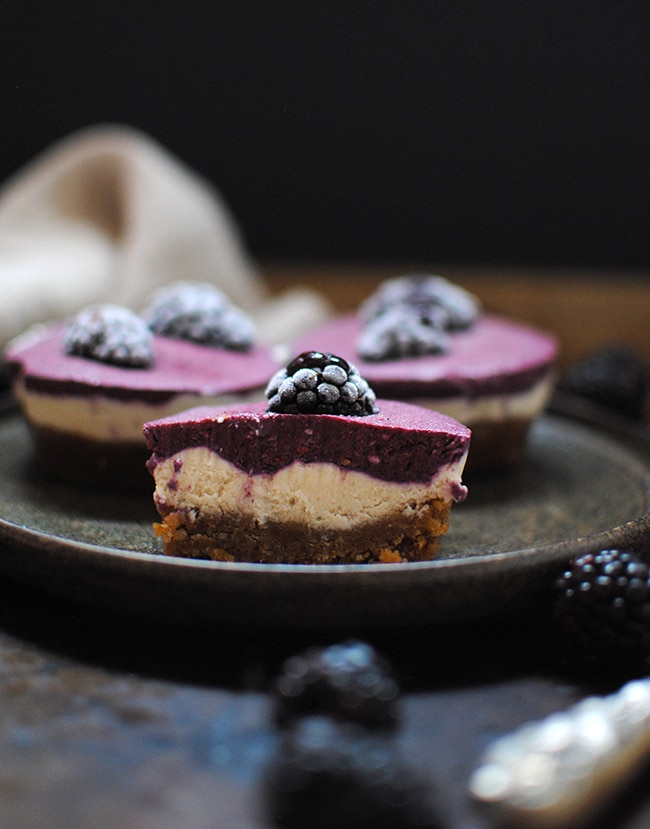 4.43 from 7 votes
Print Recipe
This easy 8 ingredient raw cheesecake recipe can be made in a blender or food processor in no time flat! Healthy, raw, vegan, gluten-free, and delicious! 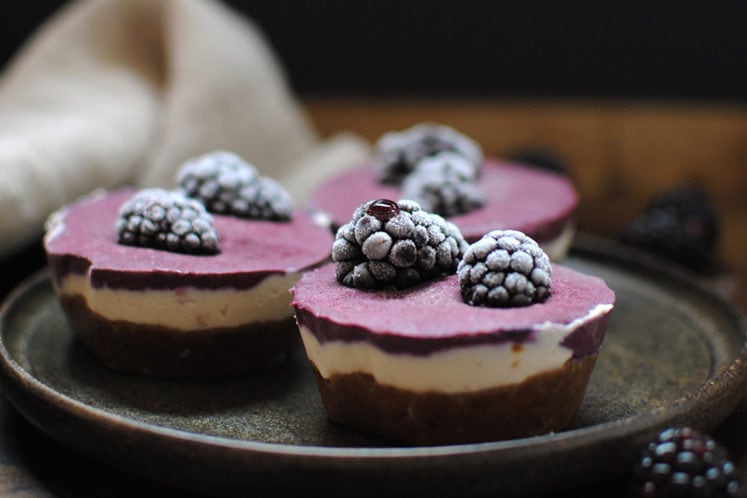 Are blackberries not really your thing? Here are  other cheesecake recipes you can try!

Raw Lemon and Caramel Cheesecake
This lemon cheesecake by Gather and Feast is topped with chocolate caramel glaze and caramel clusters made from activated buckwheat. 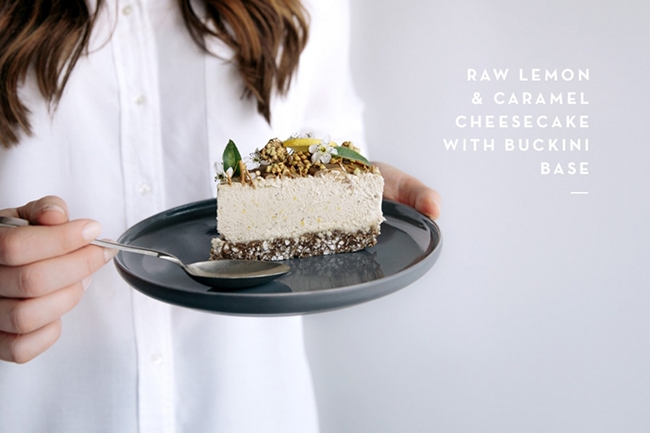 Vegan Oreo Cheesecake
This no-bake vegan cookies and cream cheesecake recipe will win over even your most skeptical friends. 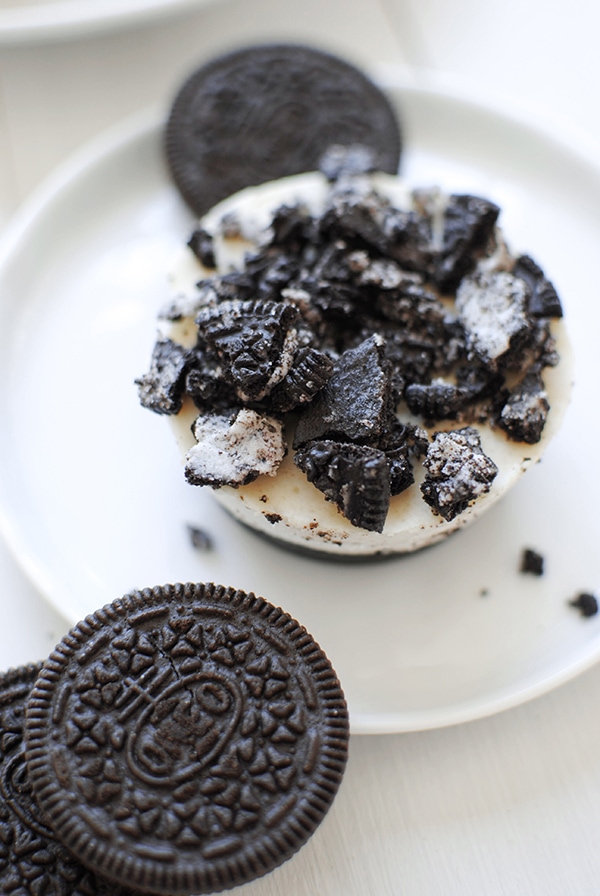 Raw Double Chocolate Orange Cheesecake
This raw cheesecake has a chocolate brownie-like base, a creamy orange layer, a luscious chocolate layer, and is topped with a chocolate sauce made from carob powder. 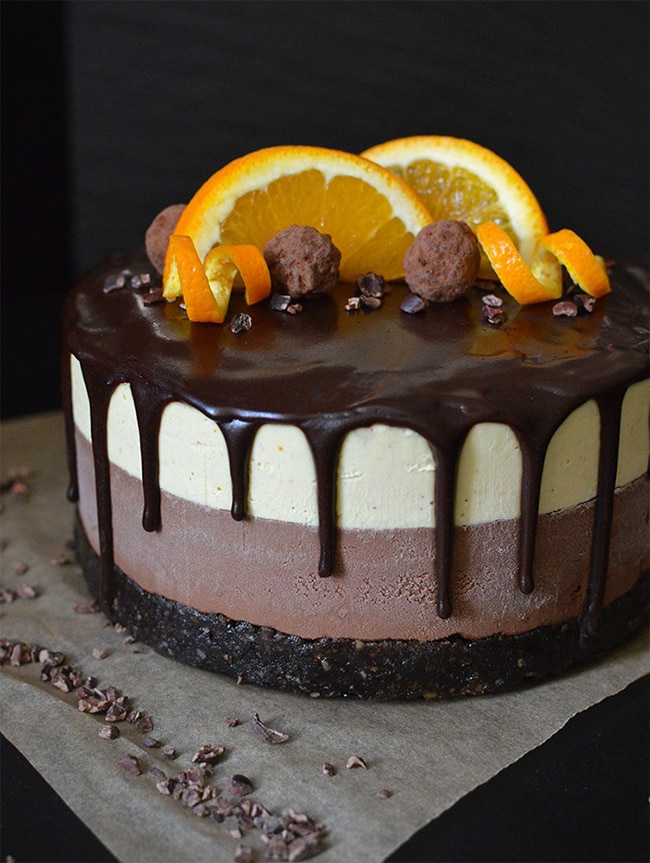 Raw Mango, Macadamia and Raspberry Cheesecake
This striking raw cheesecake features a layer of mango and a layer or raspberry cheesecake and is topped with edible flowers and fresh raspberries. 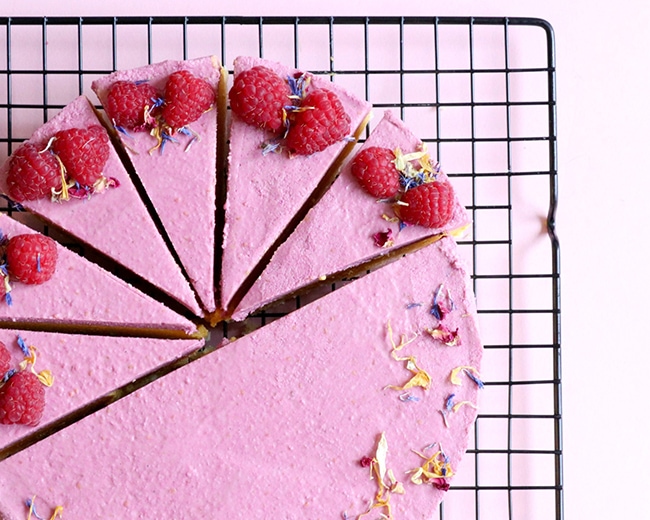 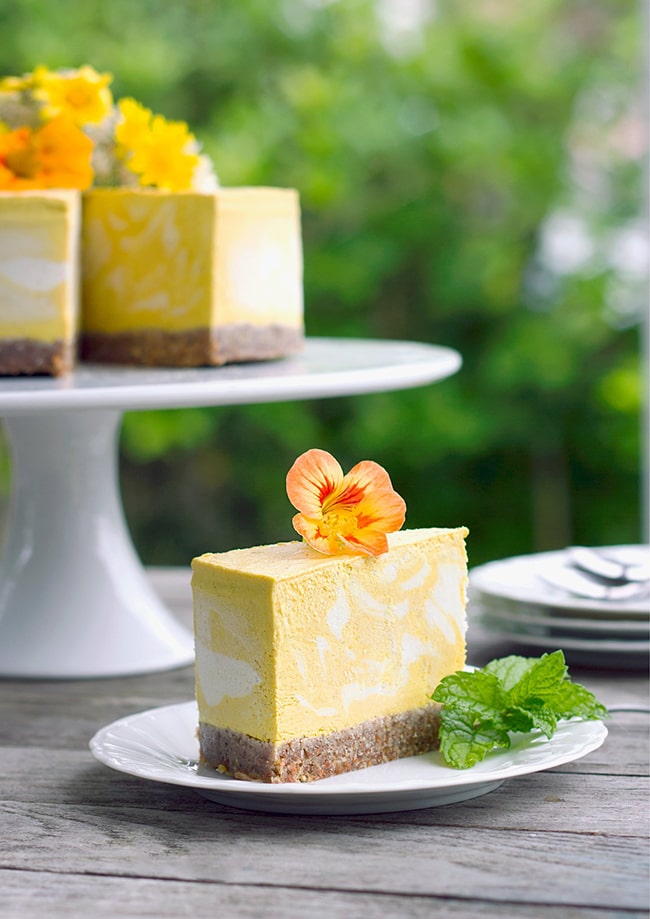 Key Lime Cheesecake
This tart cheesecake is like a lime meringue, but in cake form. It’s also got a salty pretzel crust, which makes it taste a little bit like a margarita! Serve with a shot of tequila. 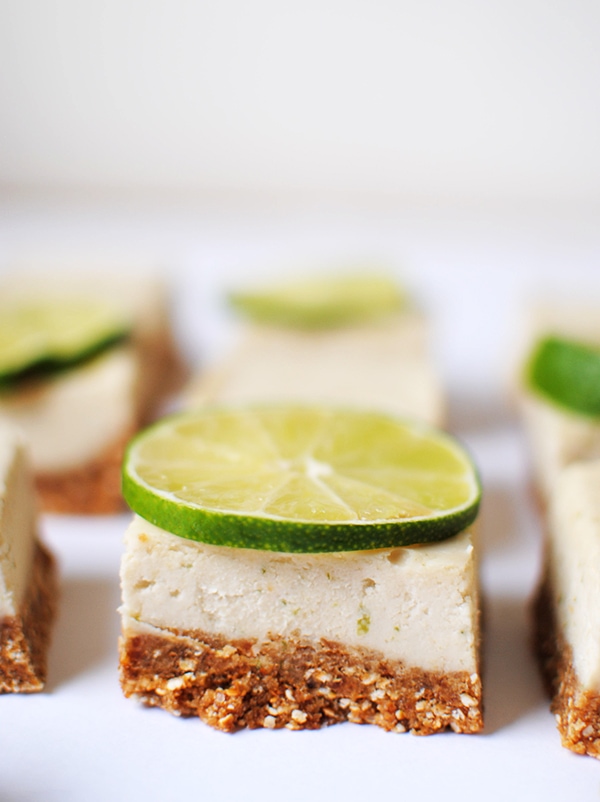 Latest posts by Rebecca Swanner (see all)
As an Amazon Associate we earn from qualifying purchases. This post may contain affiliate links from Amazon and other sites that we collect a share of sales from.
27.4K shares