Home » Recipes » Ice Cream and Popsicles
This post may contain affiliate links that we collect a share of sales from. Click here for more details.
826 shares
Jump to Recipe 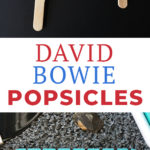 In 1976, David Bowie’s diet consisted of three things: Milk, red peppers, and cocaine. At least, that’s according to David Buckley’s biography of the Man Who Fell to Earth and gifted us with everything from Ziggy Stardust to Labyrinth to the only song I ever liked by Nirvana. And, it’s that diet that inspired these Ghost Pepper Ice Cream Popsicles.

Because here’s the thing, I like things spicy. Like really spicy. Like, I was dating a guy last summer and he made a point of asking the waiter to bring hot sauce to the table no matter what we were eating because he was convinced I added it to everything. (He even did this when we were getting pancakes. Turns out, it’s not so bad on pancakes.) 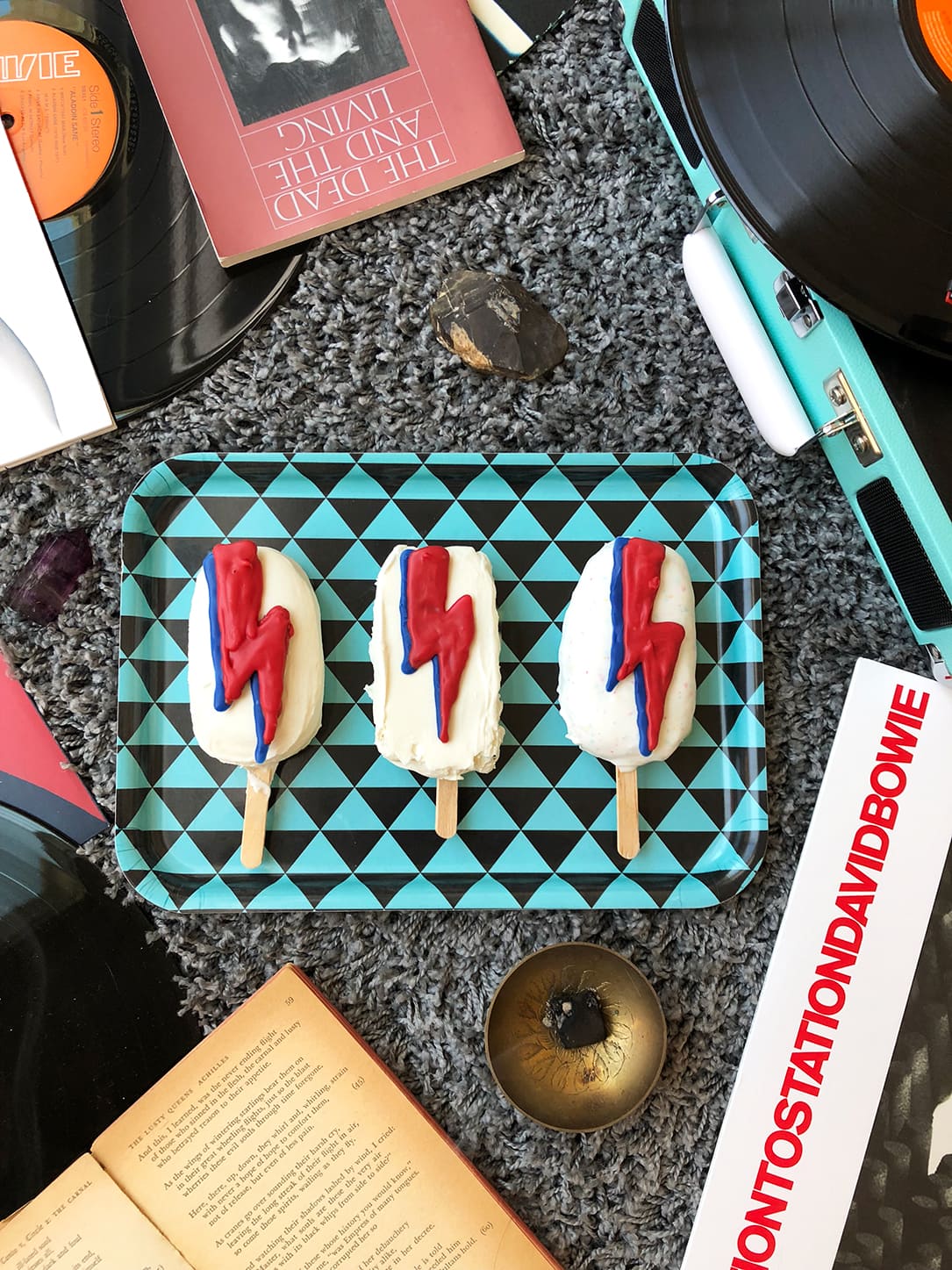 In preparation for Popsicle Week, I was buzzing around the Internet looking for inspiration, and somehow stumbled onto that strange fact about what David Bowie supposedly consumed during the making of Station to Station.

I think it was around 2 am. About when your brain thinks things like “Ghost Pepper Ice Cream is a good idea.” (Turns out it wasn’t wrong. This time.)

To make this hot ice cream, I decided to use milk as the base, then combine the peppers and the cocaine of his diet into one ingredient: ghost peppers. I’d infuse these into the milk and then freeze the whole thing.

While I don’t recommend eating ghost peppers straight, the milk counterbalances their insane heat and — if you like spicy things like I do — keeps you coming back for more.

Where Can I Buy Ghost Peppers?

About that. I called around to a variety of stores an an attempt to buy ghost peppers fresh anywhere in Los Angeles.

I didn’t have time to grow my own and I didn’t want dried ones and I had run out of time to order any online… so I was in a pinch.

Finally, I rang up Light My Fire, a hot sauce purveyor located in the center of the Farmer’s Market. They didn’t have any fresh fresh ones, but they did have a jarred version of them and they assured me they’d still be hot. I headed right over.

How Hot Is a Ghost Pepper?

A Bhut Jolokia or ghost pepper is 1,000,000 Scoville heat units (SHU). That means it isn’t as hot as a Carolina Reaper or Scorpion Trinidad, but you don’t want to eat these things raw. Depending on your condition, it might actually be quite dangerous.

Hottest Peppers in the World

How to Handle a Ghost Pepper

Since I am prone to touching my eyes, to work with the pepper, I removed it from the jar with a fork, and used the fork to hold it while I sliced it into little bits with a knife. I then used the knife to scrape it off the cutting board into the milk mixture on the stove. 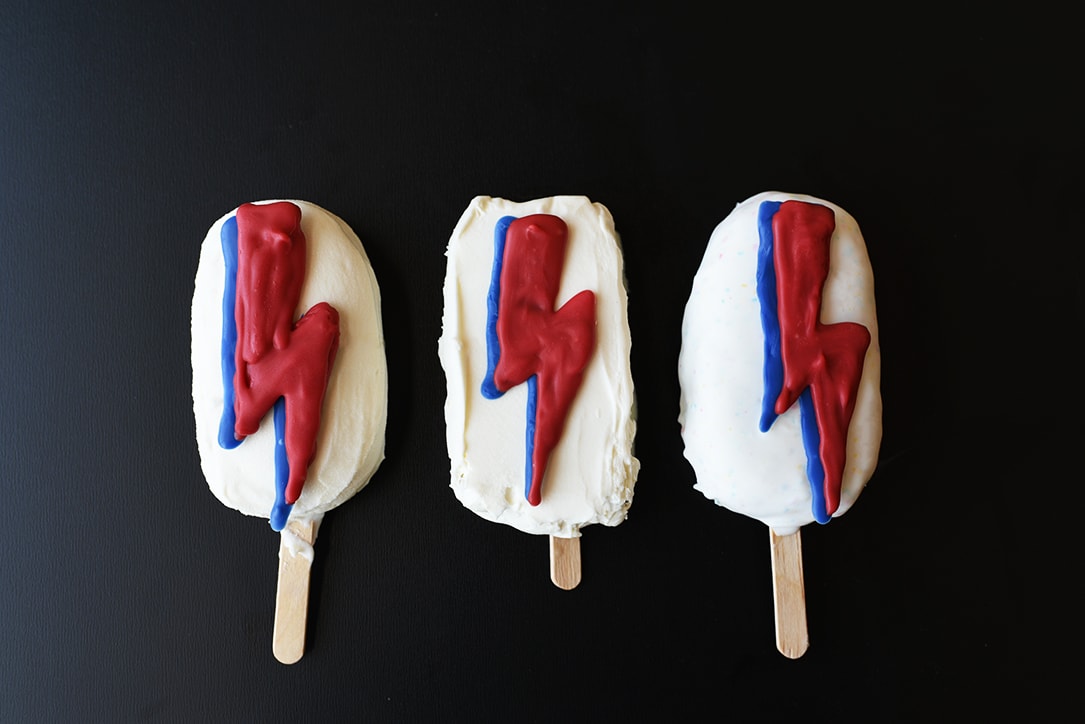 How to Make This Hot Ice Cream

Once you’ve found the ghost peppers, mince one and add it to a small saucepan along with whole milk, sugar, cream, and salt. Heat the mixture, stirring continually, until it’s just starting to boil, then remove from heat, cover, and place in the fridge for one hour.

Strain the mixture into a bowl to remove the bulk of the ghost pepper seeds and skin. Scrape half of the skin back into the mixture, then return the mixture to the saucepan and heat it over low heat until warm.

In a separate bowl, whisk the egg yolks. Slowly pour the milk mixture into the egg mixture, stirring the entire time so not to curdle the eggs.

Once the eggs and the milk are about the same temperature, pour the egg mixture into the saucepan, and, stirring continually, heat the mixture until it coats the back of a wooden spoon or has reached 175 degrees. Remove from heat, pour through the mesh strainer into a bowl. Cover and place the bowl in the fridge until it has cooled.

Pour the mixture into popsicle molds and freeze. Add the popsicles sticks after 30 minutes.

No joke, while this recipe isn’t the world’s hottest ice cream, it is very spicy. So, please use caution when serving and do not serve them to children, pregnant women, or anyone with a heart or breathing condition.

How to Decorate the Popsicles

For an extra David Bowie-inspired touch, I dipped these in a mixture of melted white Wilton Candy Melts and coconut oil (1 Tbsp per bag) and placed them back in the freezer before photographing them.

For the Aladdin Sane lightning bolt, I created a template on parchment paper. I then melted red and blue candy melts and used piping bags fitted with a Wilton number 2 round tip and piped out lightning bolt designs in blue to match the album cover. I placed these in the freezer for 10 minutes before piping the red on top. After piping the red, I placed them in the freezer for another 10 minutes.

5 from 9 votes
Print Recipe
These hot ice cream popsicles turn up the heat! 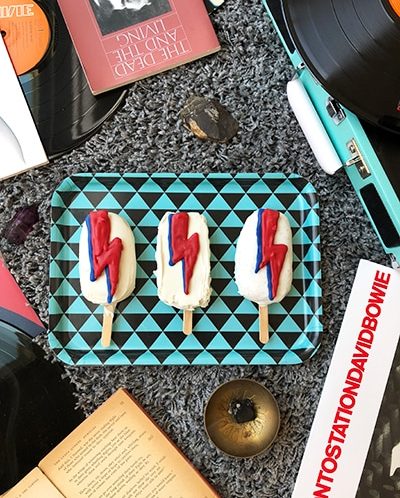 Do not serve to children, pregnant women, or anyone with a heart or breathing condition. When you remove the milk mixture from the fridge, it might have a layer on top. This is normal. Simply stir and pour through the mesh strainer. If your egg and cream mixture curdles during the heating process, process in blender for 30 seconds before transferring to the bowl.
Nutrition Facts
Ghost Pepper Ice Cream Popsicles
Amount Per Serving (1 popsicle)
Calories 272
* Percent Daily Values are based on a 2000 calorie diet.
Course: Dessert, Ice Cream
Cuisine: British
Keyword: ghost pepper
Author: Rebecca Swanner
Did you make this recipe?Leave a review below, then take a photo and tag @letseatcakeblog on Instagram so we can see it!

Latest posts by Rebecca Swanner (see all)
As an Amazon Associate we earn from qualifying purchases. This post may contain affiliate links from Amazon and other sites that we collect a share of sales from.
826 shares