Home » Recipes » Bread
This post may contain affiliate links that we collect a share of sales from. Click here for more details.
811 shares
Jump to Recipe 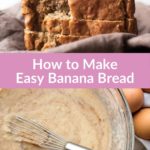 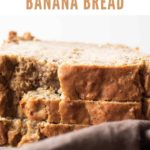 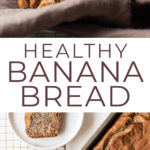 This Healthy Banana Bread is lower in sugar and higher in protein than most banana bread recipes. We tried five different recipes to get here, so we hope you like it. If you don’t, we’ll just go back to crying into our pillow. 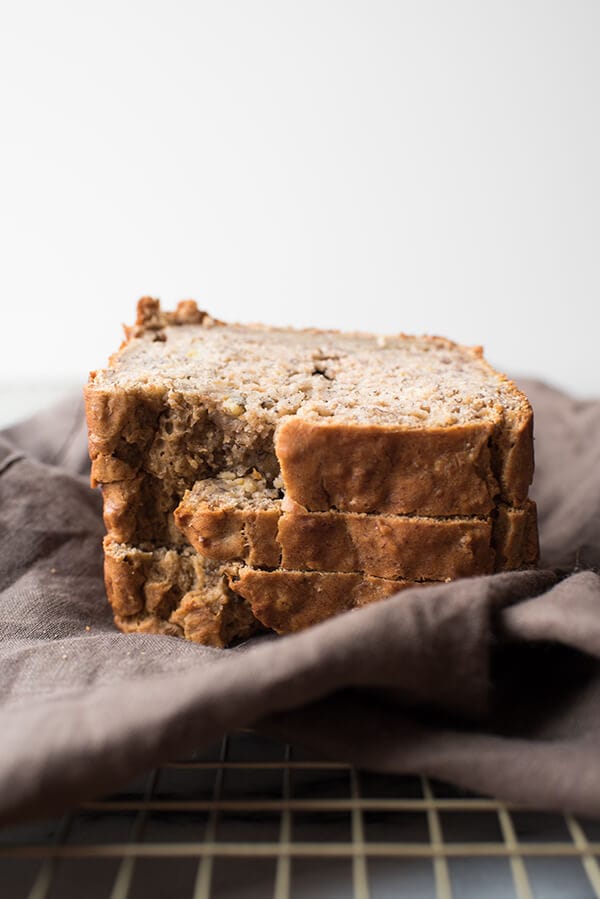 Why I Wanted to Make a No Sugar Banana Bread

I don’t have any issue with sugar or butter, but I wanted to give myself the challenge to create a healthy banana bread recipe that didn’t use either. Not even “healthier” refined sugar substitutes like honey or maple syrup. And, I wanted the banana bread to still taste moist and delicious. As I said, a challenge. (For a less healthy version, we like this one from Food52.)

You wouldn’t think it would be all that hard to develop a recipe for a low sugar healthy banana bread. But it took five tries until I finally came up with something I think you’ll love.

The final version of my super healthy banana bread incorporates caramelized bananas, Greek yogurt, applesauce, and just a touch of maple syrup to bring out the other flavors.

To make the final healthy banana bread recipe, I used the following ingredients: 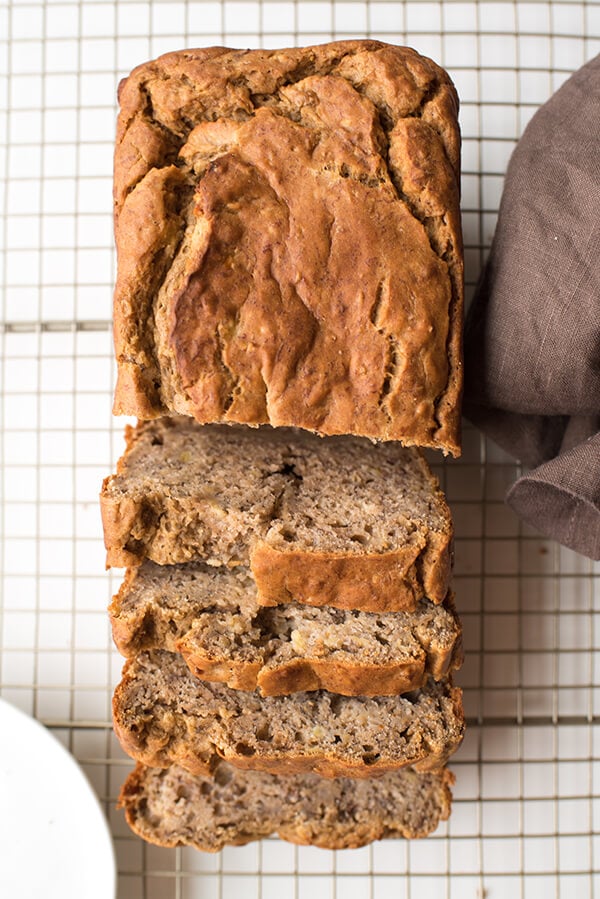 I whisked the dry ingredients together, all the wet ingredients together, and combined them. It needed more cinnamon and more sweetness. It was fine. It was The Stone Temple Pilots of banana bread. Dense, not super flavorful, not sweet, basically like bread. It was good if you warmed it up and drizzled honey on top. Not the best, not the worst.
Grade: C

Instead of using ripe, yellow, unspotted bananas, I used almost black bananas. These super spotted, super sugary bananas would certainly result in a sweeter loaf, right? Nope. Most of the bananas congealed together in a mass at the bottom of the loaf. It tasted undercooked and gummy, even though it was in the oven for-ev-er. Sad face.
Grade: F

I went back to the original healthy banana bread recipe, used spotted yellow bananas that I warmed up for 30 seconds in the microwave, swapped the all-purpose flour for whole wheat flour (because that would ostensibly make banana bread loaf a bit healthier) and increased the flour to 319 grams (2¼ cups). I also stopped melting the coconut oil and started mixing it in after combining the wet and dry ingredients. I increased the cinnamon to 1 tsp. and added ¼ tsp. cloves. The whole wheat flour overwhelmed the other flavors and on balance, the bread still wasn’t flavorful enough.
Grade: B-

This version was the same as #3, but used all-purpose flour instead of whole wheat flour. But it tasted muted. Ugh. No one wants mime bread.
Grade: B 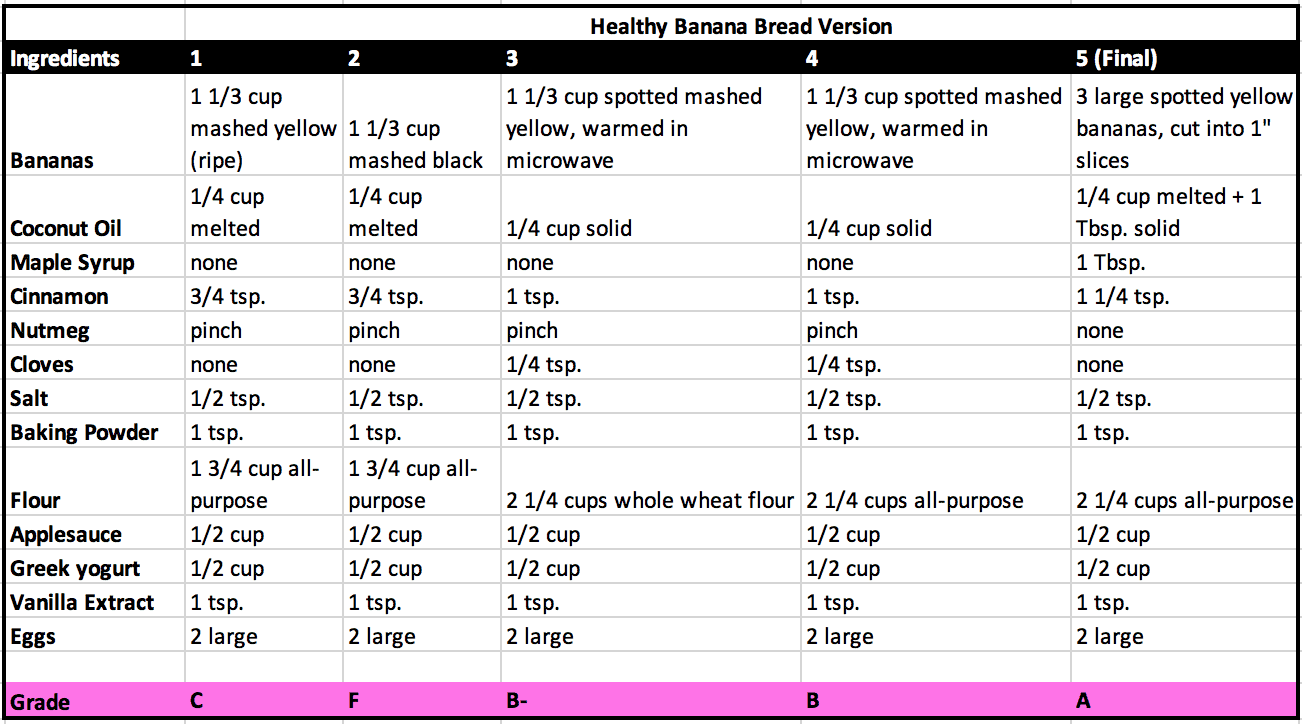 How to Make Healthy Banana Bread

After four attempts to make a healthy banana bread that was lower in sugar, I did a bit more investigating and found that while many recipes have so much sugar that it masks the taste of everything else, sugar, like salt, is a flavor enhancer. The trick is to add just enough.

To keep this healthy banana bread recipe still relatively low in sugar, I caramelized the bananas.

I sliced the just slightly spotted yellow bananas into 1″ medallions and placed them and 1 tablespoon of coconut oil into a nonstick skillet. I turned the heat to medium low, stirring the mixture until the bananas had caramelized.

I poured the banana bread batter into a bowl, added the other wet ingredients and the remaining cinnamon.

For kicks, I toasted ½ cup of walnuts and added those to the dry mixture. I combined everything and poured the final mixture into a nonstick loaf pan and baked it for 55 minutes at 350° F. When I stuck a knife inside, it came back mostly clean, and the internal temp read 170°F.

This healthy banana bread was moist, light, and super flavorful. It tasted of bananas and cinnamon and the crust was just ever so crunchy. And, despite having tested multiple other loaves over the week, it was devoured quickly by my taste testers.
Grade: A 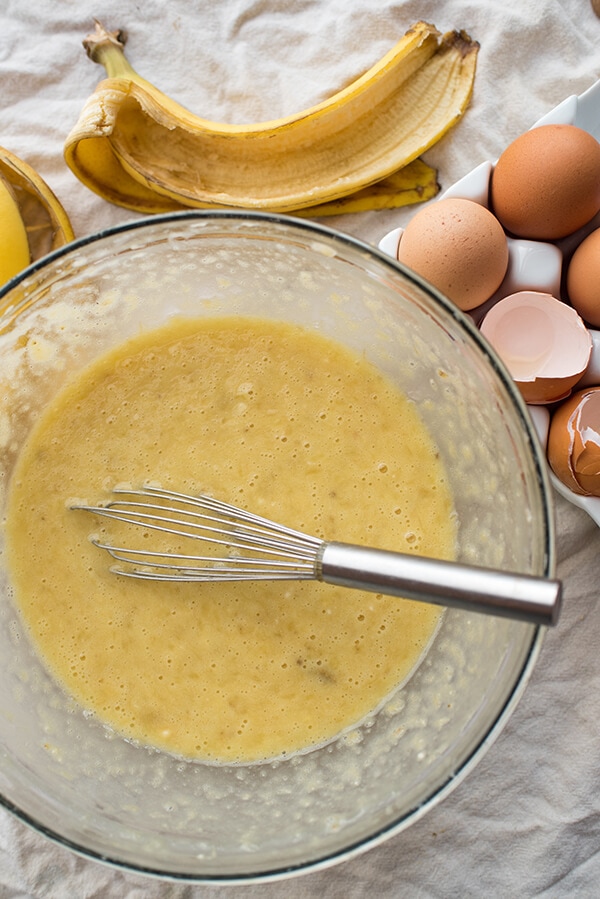 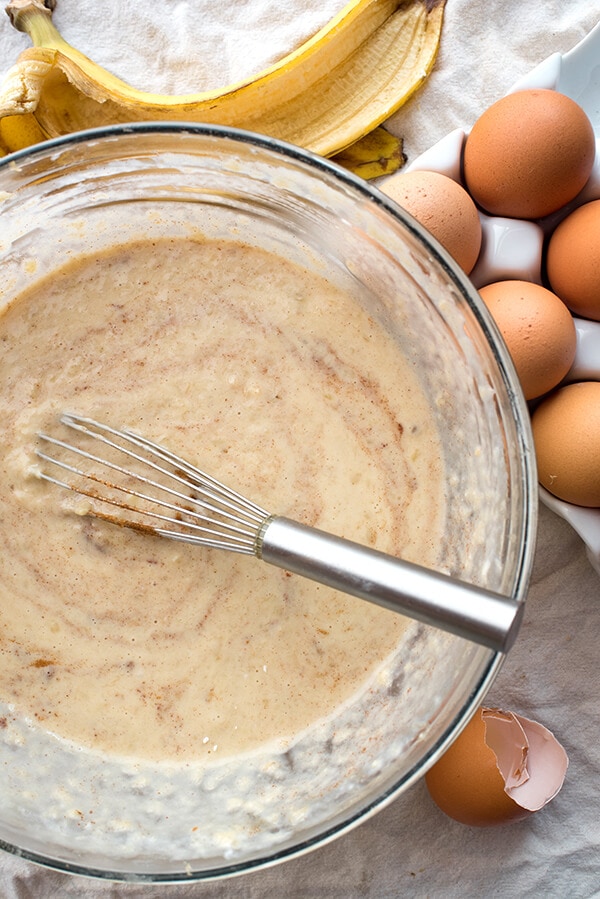 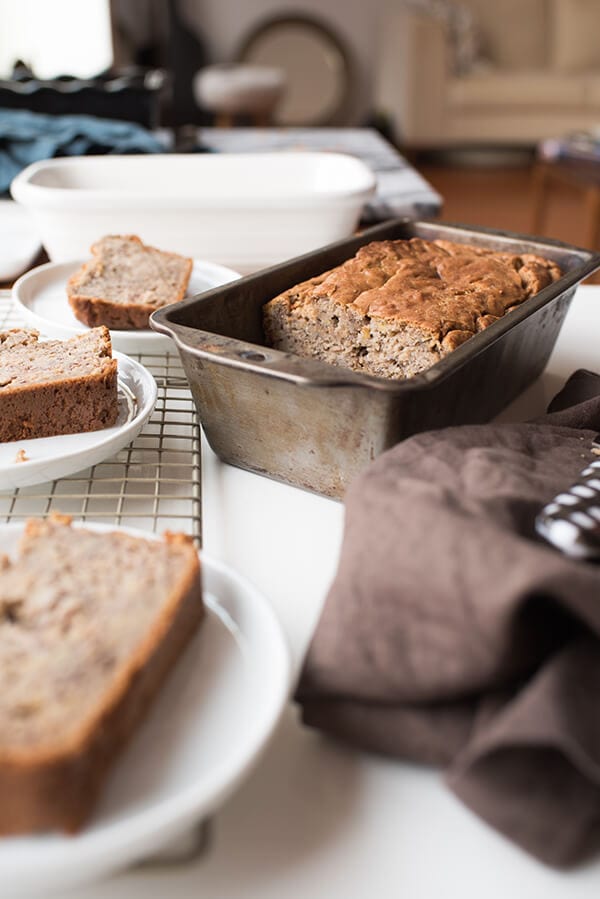 If You Enjoyed This Healthy Banana Bread, Check Out: 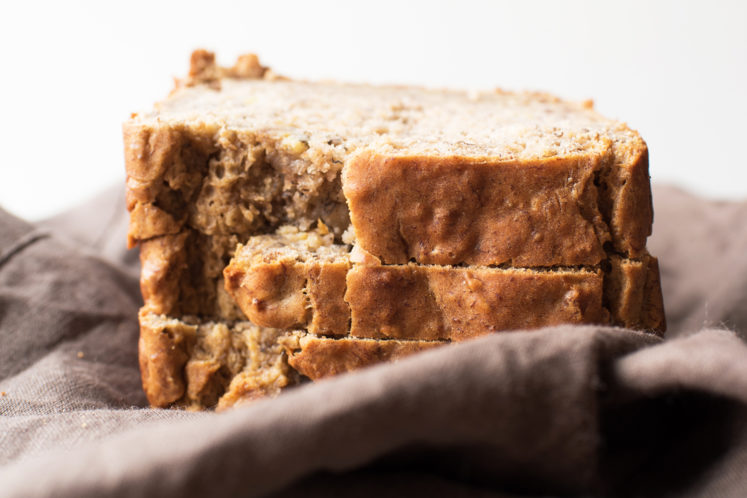 Latest posts by Rebecca Swanner (see all)
As an Amazon Associate we earn from qualifying purchases. This post may contain affiliate links from Amazon and other sites that we collect a share of sales from.
811 shares