Home » Recipes » Cakes
This post may contain affiliate links that we collect a share of sales from. Click here for more details.
1.4K shares
Jump to Recipe 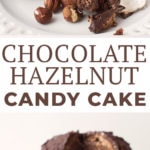 This Chocolate Hazelnut Candy Cake has a chocolate cake base and a center of chocolate and hazelnut HemisFares gelato that’s wrapped in a layer of crushed hazelnut cookies. Finally, it’s enrobed in a layer of hazelnut-studded chocolate the creates a hard, candylike shell. 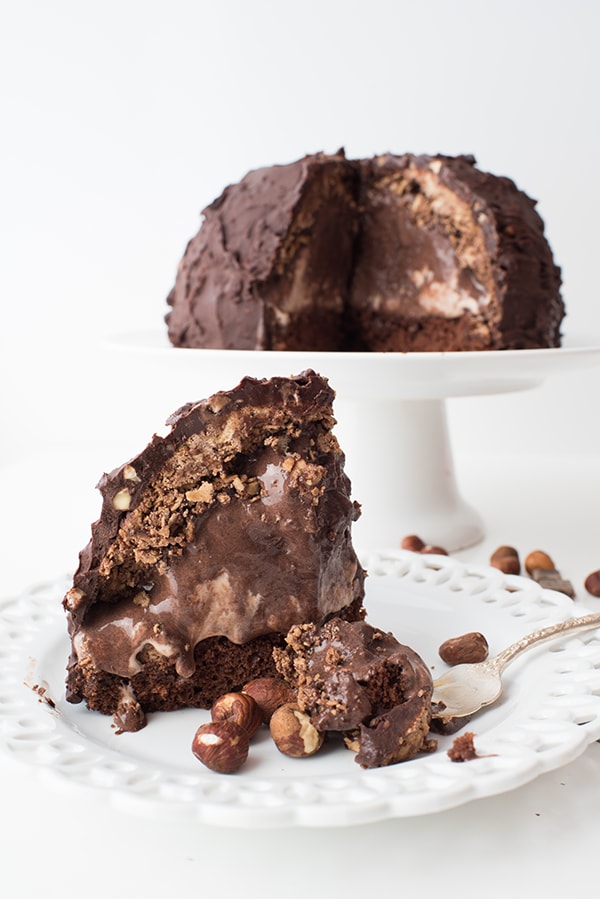 Hollywood just had it’s biggest night. No, not the Oscars (ok, that too and yay to my favorite film of last year for winning Best Picture! And, now there are so many more films I’ve added to my must-see list… including everything starring Rita Moreno). It was also the night that I figured out how to put the finishing touches on this Chocolate Hazelnut Candy Cake. A cake that might have been inspired by a certain hazelnut chocolate candy.

When I first envisioned this chocolate hazelnut cake, it was going to be a simple ice cream bombe. It would feature layers of chocolate and hazelnut gelato, and when cut, you’d be able to see the striated layers. But, then I started to dream bigger. And bigger. And now the super decadent Chocolate Hazelnut Candy Cake was born. And it now lives in my freezer where I have to try and not eat whole darn thing this week. Anyone want a slice?

What Is an Ice Cream Bombe?

Originally known as a bombe glacée, and popularized by chef Auguste Escoffier, a bombe is a French dessert made with layers of ice cream frozen within a mold. Ice cream molds used to come in all sorts of shapes and even a cursory look at antique ice cream molds will return a wild array of forms, from turkeys to old boots. Yummy!

Eventually, simplicity won and the hemispherical (read: round) ice cream bombe was born. I surmise that’s because while wild turkeys are cute, they’re not exactly versatile. How many times can you really bring a turkey ice cream cake to a party before you start being known as “that person who brings the turkey cake”? (The answer is once.)

The concept is simple. To make an ice cream bombe, simply freeze layers of different ice cream layers in a round shape, release the ice cream from the mold, and serve. This Chocolate Hazelnut Candy Cake is a play on that and it isn’t really that much more complicated. 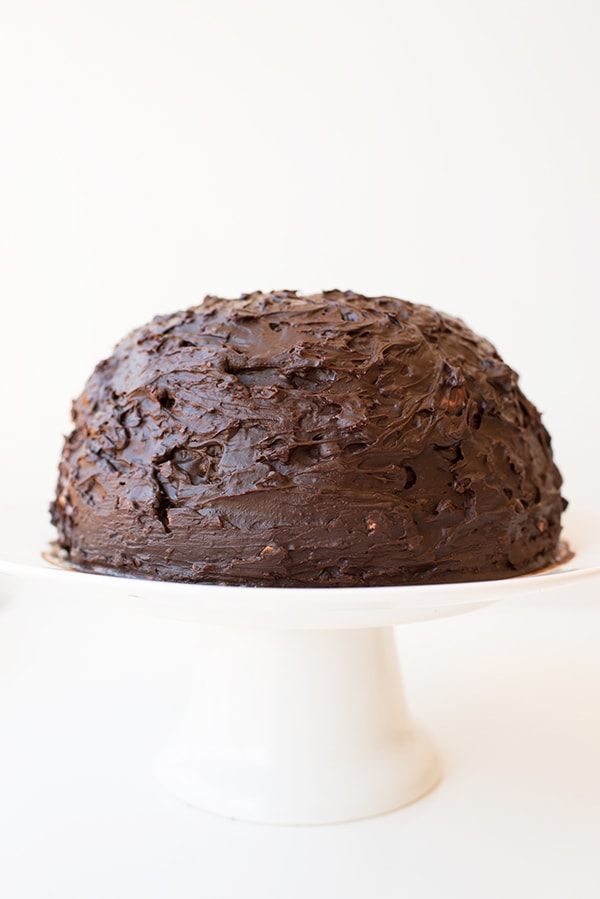 How to Make a Chocolate Hazelnut Candy Cake

To create this Chocolate Hazelnut Candy Cake, you’re going to need Chocolate and Hazelnut ice cream or gelato. You can make your own… but I recommend grabbing some HemisFares gelato from your Ralphs’ (or nearby Kroger) freezer. Buying the frozen filling will save you so much time! While gelato doesn’t harden up as much as ice cream does, I love it for this recipe because it’s so airy and creamy.

Also, since this dessert is already super rich, I felt like density of ice cream would take it too far over the top. Also, I’m so in love with the hazelnut flavor of HemisFares gelato. When I was visiting Italy’s Amalfi coast a few years ago, one of my favorite things to do was to get a scoop of handmade stracciatella or hazelnut gelato from the local gelateria and wander around town. And HemisFares gelato tastes just like those! 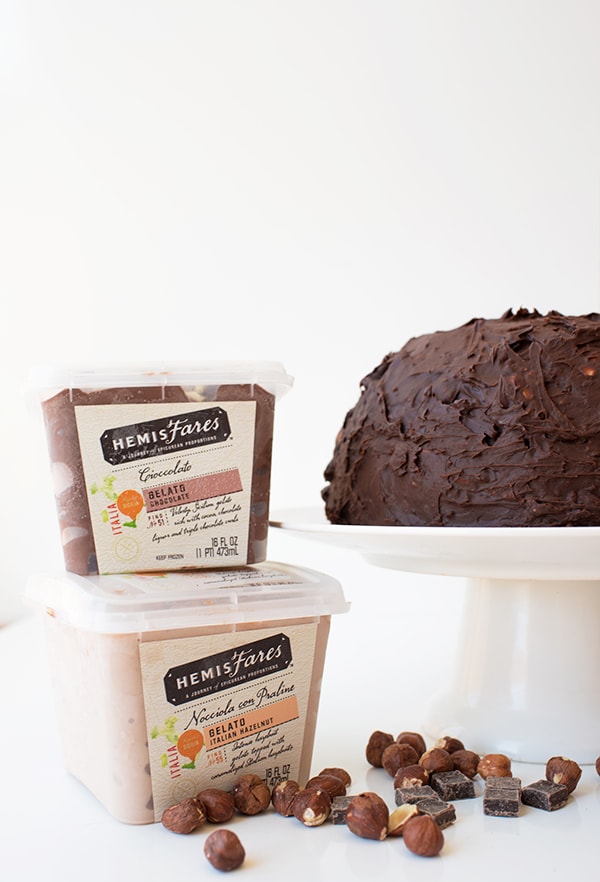 You’ll start making the Chocolate Hazelnut Candy Cake by lining an 8-inch freezable bowl with plastic wrap. This is so you can easily unmold the center when you’re ready to put the cake together. Spread the chocolate hazelnut rolled wafer cookies in an even layer in bowl. Make sure to go all the way up the sides. Place the bowl in the freezer for 30 minutes to let the chocolate hazelnut cookie layer harden.

Remove the bowl from the freezer and remove the smaller bowl. Some gelato might come with it. That’s ok. Put those bits back on the layer or eat them. Then, fill the space with about half the pint of hazelnut gelato. Place a four-and-a-half-inch bowl on top and fill in gap between gelato and top of smaller bowl. Place bowl back in the freezer for one hour. After 30 minutes, remove the chocolate gelato from the freezer to soften. 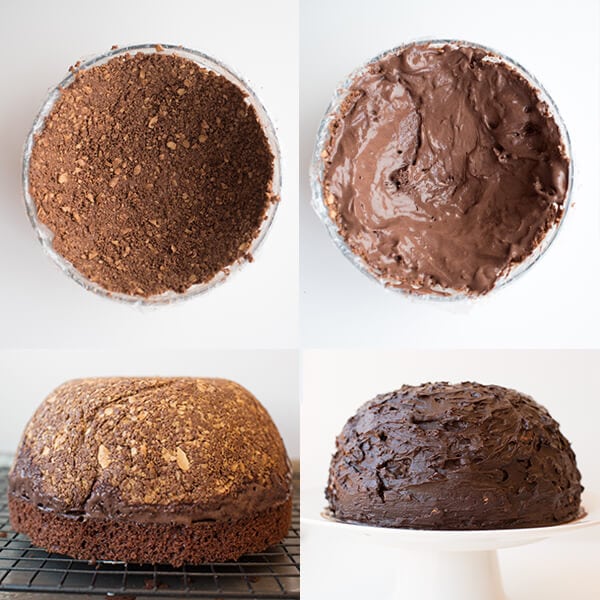 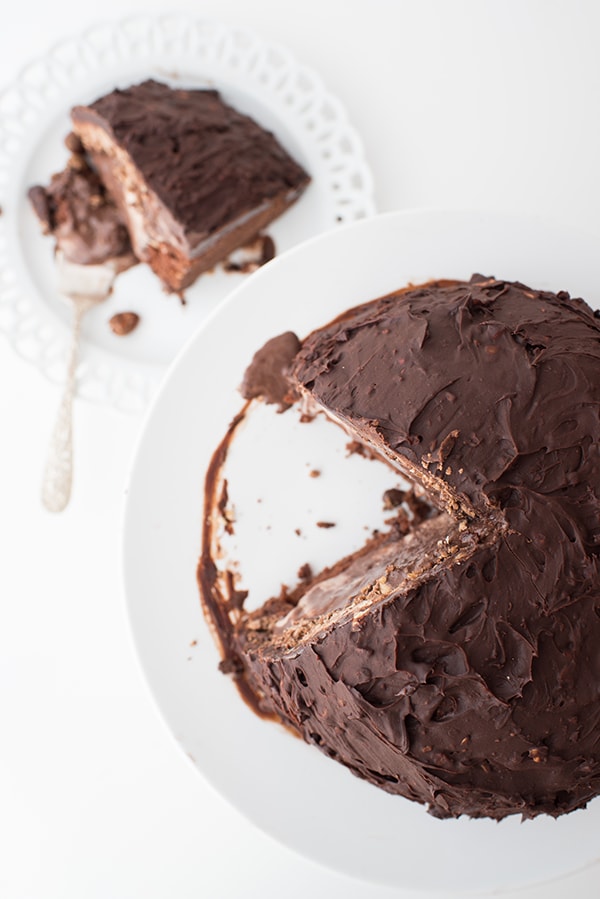 Meanwhile, bake the chocolate cake layer. Use your favorite chocolate cake recipe or use a boxed chocolate cake mix. (If you use a boxed cake mix, halve the recipe on the back and only use half of the prepared cake mix.) Bake the cake in a 8 or 9-inch round pan and let it cool completely. If you’re not an expert cake maker, I recommend a 9″ pan, because it will give you room for error when it comes to the next step.

When the gelato has hardened (as far as it will), flip the bowl and place it in the center of the chocolate cake. Remove the bowl and carefully peel off the layers of plastic wrap. If you baked a 9-inch cake, use a serrated knife to carve off the extra chocolate cake. Place the Chocolate Hazelnut Candy Cake in the freezer.

Make the chocolate hazelnut candy coating by melting chocolate chips – like these delicious Private Selection chocolate chips – in the microwave at half power for 3 minutes, stopping to stir every minute. When the chocolate chips are fully melted, stir in melted coconut oil and chopped hazelnuts. Then stir in heavy cream until the mixture has fully combined. Let it cool at room temperature or put it in the fridge to speed up this process.

Remove the Chocolate Hazelnut Candy Cake from the freezer and use a spatula to cover the entire cake with the chocolate hazelnut candy coating. Put it back in the freezer and let it harden before serving.

I realize there are a lot of steps to this Chocolate Hazelnut Candy Cake recipe, but I promise even if you’ve never baked a cake, you can do this! I am not a master at decorating cakes (promise), so if I can do it, you can too.

5 from 2 votes
Print Recipe
This Chocolate Hazelnut Candy Cake has a chocolate cake base, a center of chocolate and hazelnut gelato, and has a candy shell made from hazelnut-studded chocolate. 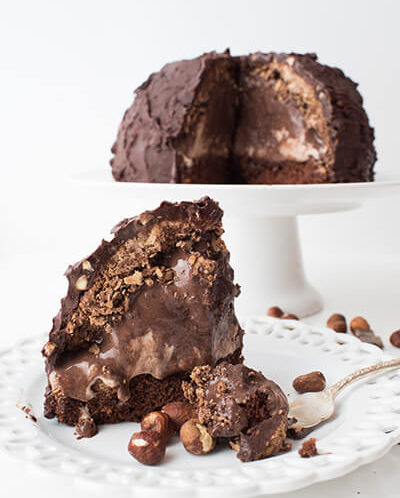 Nutrition Facts
Chocolate Hazelnut Candy Cake Recipe
Amount Per Serving (1 slice)
Calories 465
* Percent Daily Values are based on a 2000 calorie diet.
Course: Cake, Chocolate, Dessert, Ice Cream
Cuisine: American
Keyword: chocolate hazelnut candy cake
Author: Rebecca Swanner
Did you make this recipe?Leave a review below, then take a photo and tag @letseatcakeblog on Instagram so we can see it!

Latest posts by Rebecca Swanner (see all)
As an Amazon Associate we earn from qualifying purchases. This post may contain affiliate links from Amazon and other sites that we collect a share of sales from.
1.4K shares