The first season of Yellowjackets recently ended, and Showtime hasn’t been this exciting since the early days of Dexter.

If you haven’t been keeping up with the buzz, we suggest you check it out before your next round of TikTok scrolling. It’s like a gender-swapped Lord of the Flies that features Christina Ricci and Juliette Lewis, major ‘90s nostalgia, and a killer soundtrack. 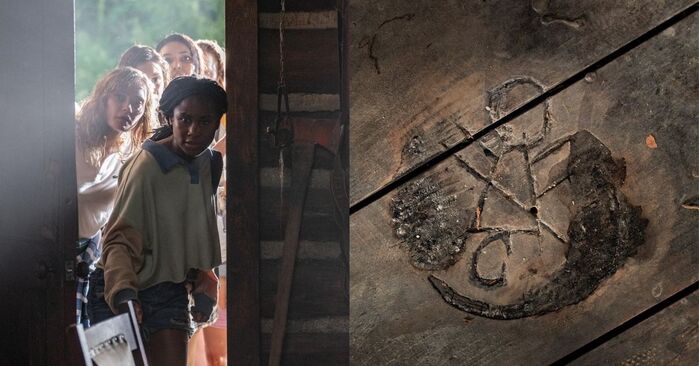 One set in 1996 that centers on the Yellowjackets, a New Jersey high school girls soccer team, after they’re stranded in the wilderness for 19 months following a horrific plane crash.

Another set in the present day. This one follows the survivors as they struggle with the trauma and secrets that have accumulated.

While the show answers more questions than similar shows *cough* Lost *cough* it still leaves viewers with plenty of mysteries. Good thing the Internet is great at coming up with insane theories!

Here are the weirdest Yellowjackets theories we found on Reddit alone.

1. Taissa Has Fully Accepted the Supernatural.

Well, the showrunners were kind enough to let us know what happened to Tai (Jasmin Savoy Brown / Tawny Cypress) and the family dog. Did Tai sacrifice their family dog to win? If so, did she do it willingly or when sleepwalking?

By sleepwalking, we mean eating dirt by the fistful, haunting her son outside his window, and killing the family dog. You know, a casual Thursday night.

Shauna (Sophie Nélisse / Melanie Lynskey) may have – nonchalantly – murdered Adam. As you one does.

But, we have a feeling that his identity is still important and to be found out in Season 2. A wait that will feel even longer than a one-minute plank hold.

Many viewers have considered that Adam may be an adult Javi (Luciano Leroux) since no one saw him again after Shauna told him to “Run!” in the midst of an unplanned mushroom trip. For all we know, he kept running until he found civilization. Or whatever is making the universe work.

Or perhaps he just lost touch with the other survivors after they were rescued and no one knows what he looked like. We do know one thing, though. He’s dead.

One Reddit user argues that the wolf attack never happened. You know the one that ripped off half of Van’s face? How many wolf attacks do you know about?

In the present day, Taissa has very realistic hallucinations of wolves. After seeing the wolf attack on Van (Liv Hewson), you could assume this is just PTSD.

But perhaps wolves are just something she sees in her dissociative states. As the theory goes, if she thought Van was being attacked, Tai could have shot the flare gun off and the flare hitting Van was what actually harmed her.

4. The Symbol Might Have Something To Do With Trigonometry.

There are a lot of theories about about what the mysterious symbol is that keeps popping up. The theories range from alchemy to sigils to trigonometry. There isn’t a matching alchemical symbol, though.

And this explanation surrounding trigonometry is fascinating. It also fully cements our theory that we absolutely would not survive any mathematics-based wilderness. Which is why we bring a mathematician with us everywhere we go. They especially love our trips to Jo-Ann’s.

There are a lot of questions surrounding Lottie (Courtney Eaton) and her rise to a potential future cult leader. She’s certainly turning some heads with her premonitions, bear taming skills, and active seance participation.

This might be due to her untreated schizophrenia (though that doesn’t explain the bear). We prefer to go with the theory that she’s possessed. By the woods? By the dead cabin guy? By expired soup? You’ll have to wait and find out.

6. What Happens to Shauna’s Baby?

Shauna and Jeff’s daughter in present day, Callie, doesn’t work out to be the right age for the baby in Shauna’s belly in 1996. So, what happens to that baby?

One theory is that Shauna gave the baby up for adoption.

The other theories are more sinister. One is the baby doesn’t survive the birth, another is it’s been cannibalized, and another is that it was sacrificed.

In the seance episode when Lottie is (possibly) possessed, she says to Shauna, “It wants what’s in you.”  It referring to the baby that Lottie wants to sacrifice to whatever is in the woods – or maybe the woods itself. If only those trees could take up a normal hobby, like making maple.

7. Misty Is A Serial Killer and Cannibal.

Just call her Hannibal, because this theory claims present day Misty (Christina Ricci) has become a serial killer to support her taste for human flesh.

If this theory pans out, that proves that you can take her out of the wild but you can’t take the wild out of her. After all, as Wednesday once said, “I’m a homicidal maniac, they look just like everyone else.”