Home » Recipes » Desserts
This post may contain affiliate links that we collect a share of sales from. Click here for more details.
628 shares
Jump to Recipe 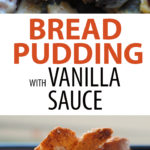 The success of this Cinnamon Bread Pudding with Vanilla Sauce was mostly the result of a happy accident. Make it with challah bread or brioche, vanilla beans, and cinnamon and top with a rich vanilla custard sauce for the perfect holiday brunch or dessert!

This was the first bread pudding recipe I’d ever created and it inspired one of your favorites on Let’s Eat Cake, this Bread Pudding with Bourbon Caramel Sauce. I recommend trying it if you haven’t yet! 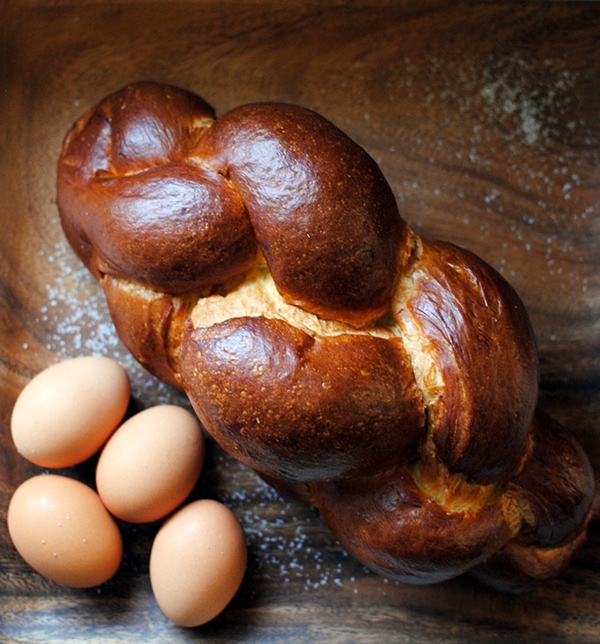 What Is the Best Bread for Bread Pudding?

You need something reasonably sturdy, which is why most bread pudding recipes call for brioche. And, while that does work well, I personally prefer challah. The eggy, doughy, braided loaf has been one of my favorites since I was a kid. It just begs to be pulled apart and dipped in cinnamon or honey or eaten straight. Don’t even get me started on chocolate challah. 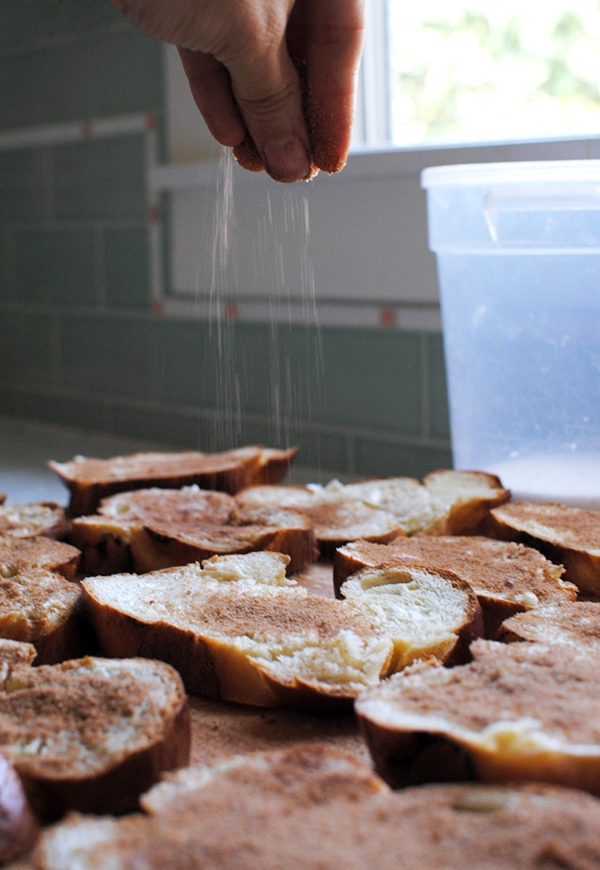 How Do I Make Bread Pudding?

This bread pudding recipe has a few more steps, but that’s the basic gist. For this bread pudding recipe, I wanted vanilla and cinnamon to be the star ingredients, which meant adding fresh vanilla bean in addition to vanilla extract, and making sure to dial back the sugar. Sugar can help accentuate flavors, as I discovered in my Healthy Banana Bread recipe, but adding too much will mask subtle flavors.

Some recipes require the challah soak in the custard mixture for 2 hours. Others require you wait until you have stale bread. As I originally baked this just before going to a Memorial Day BBQ, neither of those things was going to happen unless a time machine miraculously appeared in my living room. (Editor’s note: The Mesozoic is pretty rad, guys! Oh… incoming T-Rex. Gotta go!) 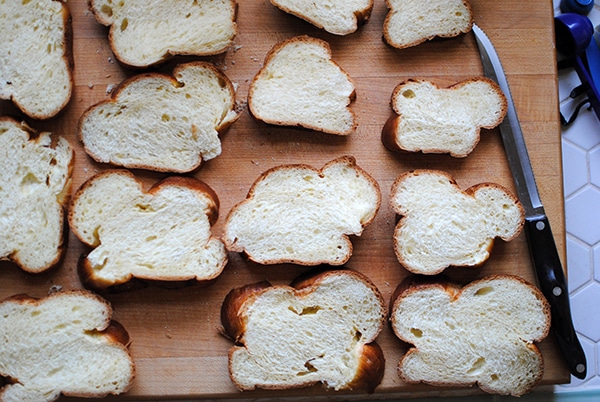 Inspired by this recipe on Rustic Kitchen, I covered the challah with cinnamon, brown sugar, and butter then baked it in a 9×13 baking dish for 10 minutes to dry it out. This let me skip the “wait until the challah is a little bit stale” step. Since there was no time machine available, that seemed wise.

While it was baking, I made the vanilla sauce. I beat whole eggs and egg yolks with sugar in a small mixing bowl until they were light and fluffy. I scraped the vanilla bean seeds into the milk and warmed the mixture on medium heat until it was almost boiling.

Once the milk was hot, I poured it over the eggs slowly, whisking the whole time so not to curdle them, then poured everything back into the saucepan. I heated the mixture on low heat until it resembled a creme anglaise custard and was able to coat the back of a wooden spoon. This is pretty much what you do when you make ice cream. Finally, I poured this on top of the pre-baked bread.

However… I skipped an ingredient. The heavy cream was supposed to be added with the hot milk, but I had completely forgotten about it until the dish was nearly done baking!

The result? The late addition of the heavy cream gave the recipe a creamy richness I don’t think it would have had otherwise, so I’ve included it in the final recipe. 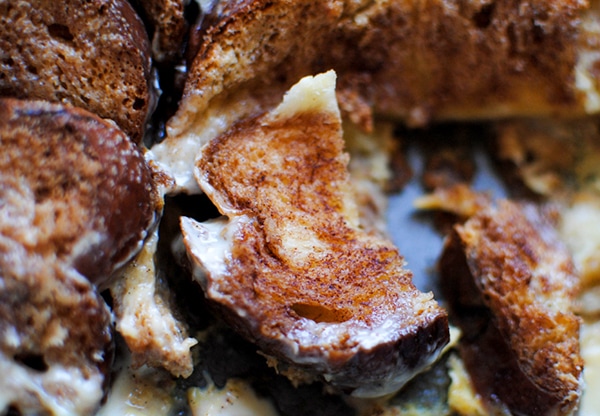 4.55 from 11 votes
Print Recipe
This Cinnamon Bread Pudding with Vanilla Sauce is rich and perfect for a holiday brunch or dessert. 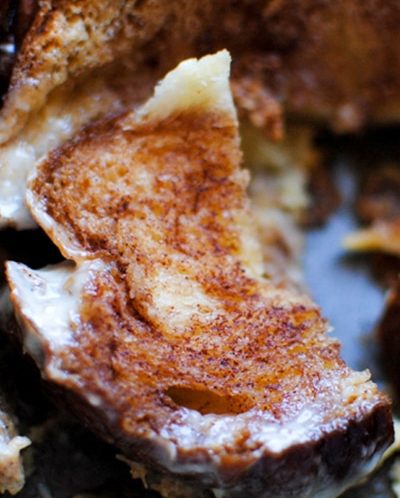 Nutrition Facts
Cinnamon Bread Pudding with Vanilla Sauce
Amount Per Serving (1 serving)
Calories 282
* Percent Daily Values are based on a 2000 calorie diet.
Course: Bread, Dessert
Cuisine: French
Keyword: bread pudding with vanilla sauce
Author: Rebecca Swanner
Did you make this recipe?Leave a review below, then take a photo and tag @letseatcakeblog on Instagram so we can see it!

Latest posts by Rebecca Swanner (see all)
As an Amazon Associate we earn from qualifying purchases. This post may contain affiliate links from Amazon and other sites that we collect a share of sales from.
628 shares