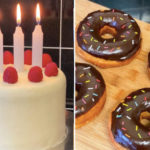 There are so many amazing young chefs on TikTok now and it’s very cool to see how they’re re-imagining how the food world can look. And taste, probably, but so far I haven’t been able to get my hands on anything to sample. Ash Baber has been making the most of the visual medium. And he hasn’t yet been roasted by Gordon Ramsay. 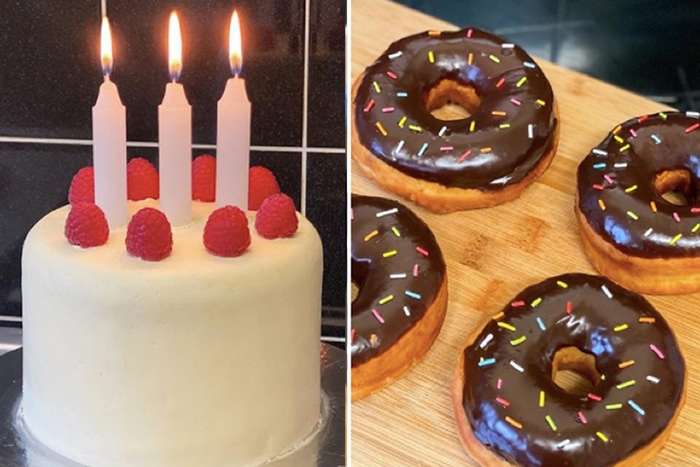 Baber’s TikTok account took off after he started experimenting with recreating the food emojis we all know and love and wish we could eat as actual recipes.

His first hit was with the birthday cake emoji, which you might remember is tall, white, has big berries and even bigger candles on top. In the TikTok, Ash says he kind of tried to do it just because it didn’t look like a cake that would hold up to him.

“Do you know the birthday cake emoji?” he says. “I wanted to see what it would look like in real life because I am confused. Like, they just put regular candles—just the ones you put on a table on top of this cake—and no one on the Apple team questioned it?”

He told Buzzfeed that the idea came to him at 2 am, as all great ideas do. “I thought of the idea of making the birthday cake emoji just because if you look at it, you’ll realize that it’s a strange emoji, it doesn’t really make sense,” he said. But his did hold up, and looks delicious, too.

The TikTok was so successful that he branched out into making other popular food emojis in real life. The hardest part isn’t the recipe—it’s the decoration.

“The cupcake and donut emoji, you wouldn’t expect them to take that long, but they actually did because of the way the emoji was created,” he said. “The sprinkle placement on the emojis is very specific, and I wanted to replicate that, so I stood in my kitchen placing sprinkles on one by one.”

He’s definitely been paying far more attention to the emoji details since beginning his series.

“I thought I was just going to post the video then move on, but the whole comment section on each emoji video I do is recommending other emojis they want to see me re-create,” he explained.

The hardest so far was pancakes, because he was struggling to make them seem as perfectly cartoon-like as the original. They look good to me:

Some don’t look exactly like the emojis the way the cake and donuts do. They just look like something really yummy, like this bloated pretzel and straight-edged croissant.

On the other hand, this Japanese treat, a dango, looks perfect:

Ash says he doesn’t intend to do all the emojis out there in the food section because there are a whole lot of them. But he says he “will keep going as long as people keep watching!”

Latest posts by Ruin My Week (see all)
As an Amazon Associate we earn from qualifying purchases. This post may contain affiliate links from Amazon and other sites that we collect a share of sales from.
81 shares