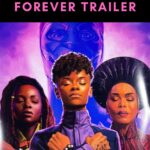 Marvel just gave us the first look at the new Black Panther movie, and they crammed more into two minutes than a procrastinating college student. So of course, everyone went crazy looking for all the Easter eggs in this Wakanda Forever trailer.

The movie, which is set to release November 2022, functions as much as a moving tribute to actor Chadwick Boseman (who played King T’Challa/Black Panther in the 2018 film), as well as an exciting promise of things on the rise for MCU. 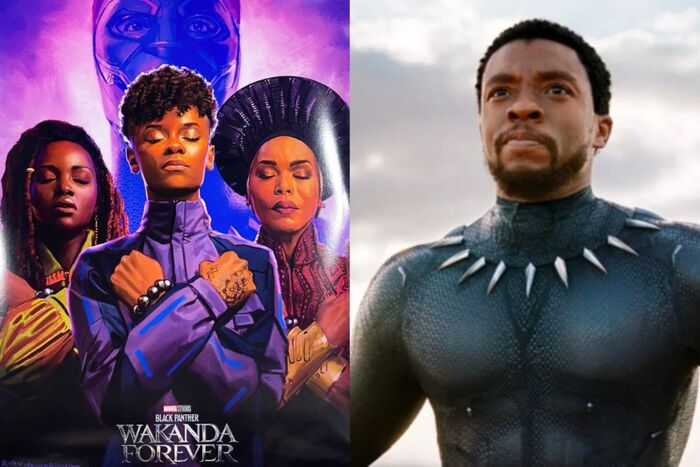 Not only do we get to see fan favorites like T’Challa’s sister Shuri (Letitia Wright) and Queen Ramonda (Angela Bassett). But we also get glimpses of all-new characters like Namor (Tenoch Huerta) and Riri Williams/”Ironheart” (Dominique Thorne) who are poised to make some major impacts on the Marvel Cinematic Universe moving forward.

Ready to take a closer look at the trailer and speculate on what’s in store for Wakanda? Here are all the Easter eggs we found in the Black Panther: Wakanda Forever trailer. And luckily, none of them were hardboiled.

The Top 7 Things We Noticed in the “Black Panther: Wakanda Forever” Trailer

We see a powerful mix of images in the trailer accompanied by the song “No Woman, No Cry.” Originally made famous as a reggae song by Bob Marley and the Wailers, the song is now covered by Nigerian singer Tems, one of the most popular artists in both the African and Nigerian music industry.

But just like when you’re running late to work and roll though that pesky red sign, the significance of the song doesn’t stop there.

The lyrics of the song encourage people to keep your head up when times get hard. And, it recognizes the strength of women during such difficult times. Considering Wakanda Forever will deal with the African nation’s loss of King T’Challa and the leadership that Queen Ramonda will have to show, the song resonates very strongly.

Speaking of Queen Ramonda…there’s actually only one line from the movie heard during the trailer, and it comes from her. She tells her audience, “I am Queen of the most powerful nation in the world and my entire family is gone. Have I not given everything?” If you don’t start to tear up now, then when?

While Ramonda’s husband King T’Chaka (John Kani) and her son T’Challa are both dead, her daughter Shuri was still alive following the events of Avengers: Endgame (and is seen in the trailer). This could suggest that Ramonda’s line comes during the five-year period when both T’Challa and Shuri temporarily vanished in the wake of Thanos’ snap. Or it could hint at something more disturbing about Shuri’s ultimate fate.

We desperately need the brilliance of Letitia Wright’s comedic timing, so we’re really hoping for the former.

Kevin Feige confirmed in December 2020 at Disney’s Investor’s Day that T’Challa will not be recast for Wakanda Forever. An official Disney press release also states T’Challa has died by the beginning of the film.

How exactly the king died remains ambiguous, but we likely see glimpses of his funeral throughout the trailer. Several of the images show Wakandans dressed in white, the color of mourning in many African funerals. Plus, their facial expressions are giving us major “mourning” vibes.

We also see Shuri carrying the Black Panther helmet and a possible image of Wakanda’s necropolis or cemetery, flanked by a statue of the first Black Panther. This, combined with a large mural of T’Challa’s face, reveal T’Challa (and Boseman’s) presence will be felt strongly in the film.

If it looks like a duck and swims like a duck, then that duck is probably having a funeral.

In the wake of Boseman’s death from colon cancer, many fans left tributes letting the Black Panther actor know he could “Rest in Power.” This sentiment carries over in the Wakanda Forever trailer where we see several platforms inscribed with Wakandan words.

According to some fans who translated the words using content from the in-world MCU book, “The Wakanda Files,” the words translate into “Rest in Power King T’Challa. Our Hero. T’was an Honor. Wakanda Forever.” As these phrases honor both the character and Boseman’s legacy as an actor, this is a nice case of art imitating life. 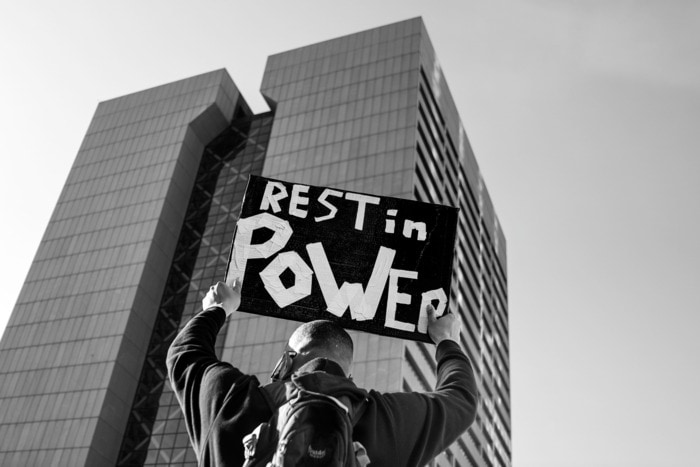 5. Potential birth of the first mutant

While the trailer acknowledges death, it also celebrates life. We see a scene depicting the ultimate water birth of the movie’s antagonist Namor. In the comics, Namor (aka. “The Submariner”) is the result of the union between a human man and an Atlantean queen.

Known as “The Avenging Son,” Namor’s been both a villain and an anti-hero in Marvel comics. Although in the trailer it looks like he’s leading his people to attack the surface world. And knowing Marvel, they could be misleading us in any number of directions.

But there’s something else significant about showing Namor’s birth. In the comics, Namor is considered Marvel’s first mutant and has worked with the X-Men. Characters like a multiverse variant of Professor X (Patrick Stewart) have already appeared in Doctor Strange in the Multiverse of Madness. And, Kamala Khan was revealed to have a “mutation” in Ms. Marvel.

Could Namor’s appearance herald something big for the MCU’s mutant population? Only time – and lots of conversations in subreddits – will tell. 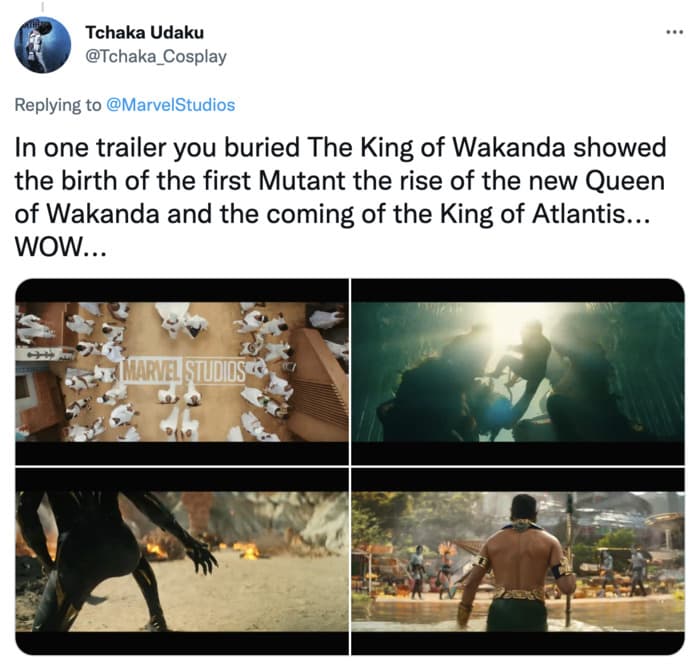 Namor isn’t the only new Marvel character being introduced in this trailer. We also see Riri Williams, who, in the comics, is a genius inventor who builds her own Iron Man-style armor at the tender age of fifteen. And we thought our cosplay costumes were cool.

Riri went on to become the adventurer and humanitarian known as Ironheart. She even used an AI programmed with Tony Stark’s persona to help run her suit, basically making Stark her JARVIS.

Ironheart is set to receive her own Disney+ TV show, set to premiere in the fall of 2023 and starring actress Dominique Thorne as Riri. For those who can’t wait, however, Riri Williams will be appearing in Wakanda Forever.

We’re not sure how she fits into the plot, but in the trailer she appears to be friends with Shuri and hammers a heart out of a sheet of metal. Does that mean the next Ironheart suit will be made out of Vibranium? 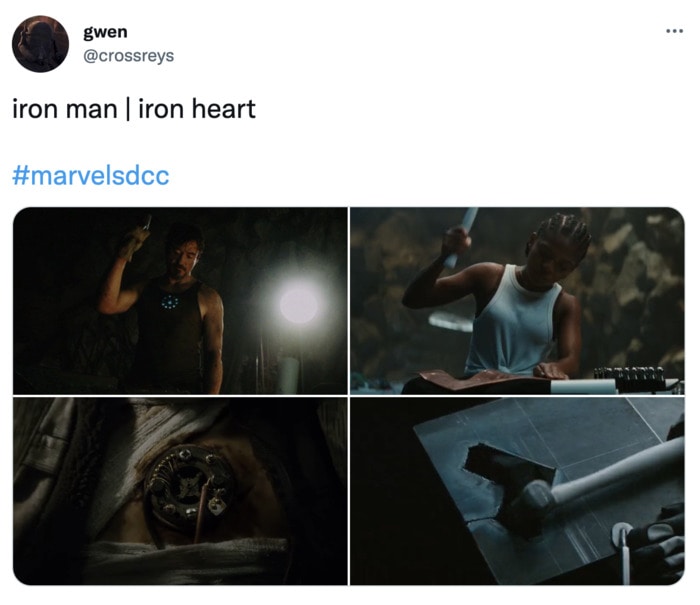 7. The role of Black Panther

While it hurts not having Chadwick Boseman back as T’Challa, the role of Black Panther was always meant to be bigger than just one person. T’Challa was the latest in a long line of Black Panthers, after all. So it’s appropriate that the trailer ends with a quick glimpse of someone in the Black Panther suit.

Who is he? Or she? In the comics, the mantle of Black Panther has been passed to both male and female heroes. At one point, Shuri herself became the Black Panther. This leads to fan speculation that this new Black Panther may be someone we’re already familiar with.

Then again, it’s possible the movie will focus more on Wakandans coping with T’Challa’s death than the exploits of a new superhero. The trailer doesn’t emphasize any single character, suggesting we’ll be seeing how an entire nation processes their grief.

As such, Wakanda Forever will probably not be a typical superhero movie, but it may be a trailblazer like its predecessor. If anything, it’ll have us trailblazing our way to a front row seat at the movie theater. And by that, we mean a reasonable middle row that won’t give us a neck cramp for two weeks.

Latest posts by Michael Jung (see all)
As an Amazon Associate we earn from qualifying purchases. This post may contain affiliate links from Amazon and other sites that we collect a share of sales from.
28 shares