Home » Food + Drink » Food News and Trends
This post may contain affiliate links that we collect a share of sales from. Click here for more details.
78 shares 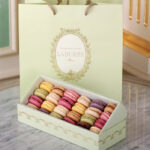 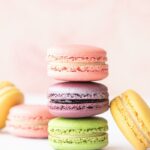 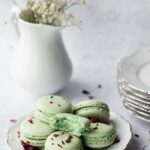 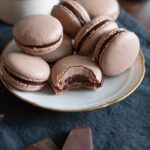 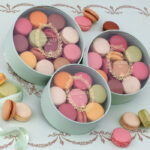 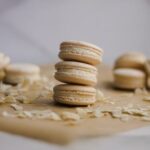 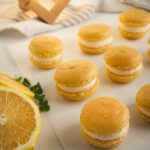 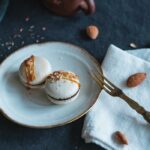 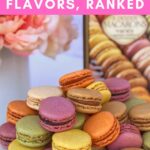 Are we in France? Or are we just in the frozen food aisle staring at the Trader Joe’s macarons? According to our most recent taste test, they may be one in the same.

Macarons are delicious, and can either make us feel dainty and cute at a tea party, or like a giant eating a burger. Luckily, your neighborhood Joe offers a variety of standard and seasonal macaron flavors. And, they come at a price that’d make you suspicious if you didn’t already trust them with your life and first born.

Now you don’t have to go to Ladurée and spend $3.50 on a dessert that only gives you two tiny – albeit delicious –bites. But how do the Trader Joe’s macarons compare with those from a certified French patisserie?

For the good of society, we grabbed our reusable bags to buy up all of the macaron flavors from our favorite grocery store. And, with our pinkies up, tasted every single one.

For comparison’s sake, we also got comparable flavors from Ladurée. Although the TJ’s products were noticeably smaller, they were also considerably (and we mean considerably) cheaper. Keep reading to see how else they stacked up against each other, as we rank them from favorite to least favorite.

We know vanilla isn’t always exciting, but it worked for these macarons.

It’s like the 2.0 version of eating vanilla buttercream with a spoon when you were a kid. It’s as if someone took how blissful and carefree you felt crushing a can of frosting and scaled it to adult preferences.

There’s all of the vanilla flavor and bliss of a blob of buttercream, but with the added sophistication of the crispy shell’s texture and a more tempered sweetness. Ah, to be young and back pain-free again.

Ladurée’s vanilla macaron: We were shocked to find that the Ladurée macaron had less vanilla flavor, and was just sort of directionless-ly sweet. Not bad, by any means. But we could have just gotten a box of Nilla wafers and gotten the gist for much less. 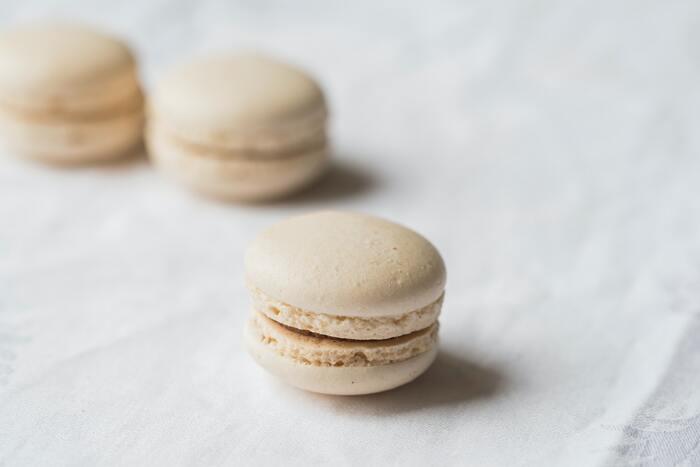 Bust our chops for ranking chocolate and vanilla as the top two. We don’t care. They’re classics for a reason.

The chocolate macaron was just good, old-fashioned chocolate flavor, and we like it that way. Want a simple piece of chocolate but worry about your friends teasing you for being basic? Get some less judgemental friends. But these macarons are still delicious.

Ladurée’s chocolate macaron: The Ladurée version was like turbo-charged chocolate. Maybe you’re trying to justify spending a couple bucks on one cookie, so you want to get as much chocolate flavor as humanly possible into one bite. Short of a spoonful of cocoa powder, this is probably the way to do it.

It’s great for those people that brag about what a high percentage of cocoa they like in their artisan bars. But it did take us by surprise. 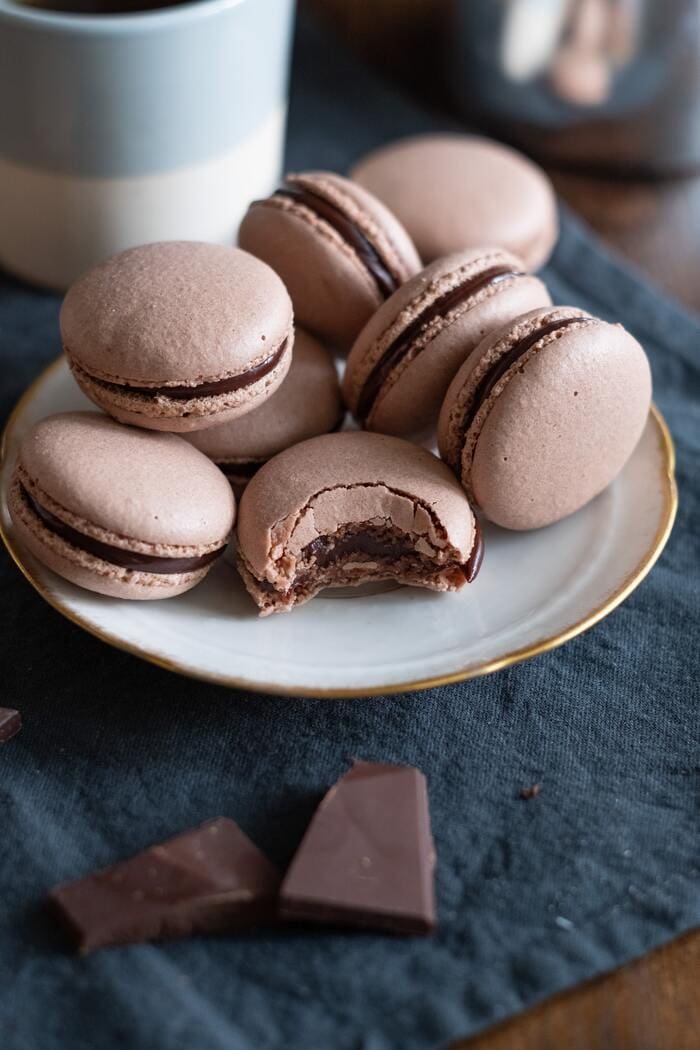 To us, simply eating macarons is fancy. But pistachio? Please don’t talk to us without an appointment. We’d like to be left alone with this treat.

Now, this Trader Joe’s flavor wasn’t whack-you-over-the-head with pistachio. But if we wanted to taste more pistachio, who’s stopping us from eating a handful of pistachios? Oh, no one? Be right back…

Ladurée’s pistachio macaron: If we were including Ladurée macarons in this ranking, their pistachio would have been our first choice. We suspect that whatever pastry school the Ladurée chefs went to was a cover for Hogwarts. It’s absolute wizardry how much pistachio flavor they packed into the cookie without sacrificing sweetness or the perfect macaron chew.

First off, bold move by Trader Joe’s for leaving the seeds in the fig filling. Are they in cahoots with Big Dentistry? Or do they just like seeing us embarrassed in public?

The filling was strong, sweet, molasses-y, and reminded us in the best way possible of Fig Newtons. Sure, those might be associated with Grandmas. But if you find these in the snack drawer? That’s no Grandma. That’s a Glamma. 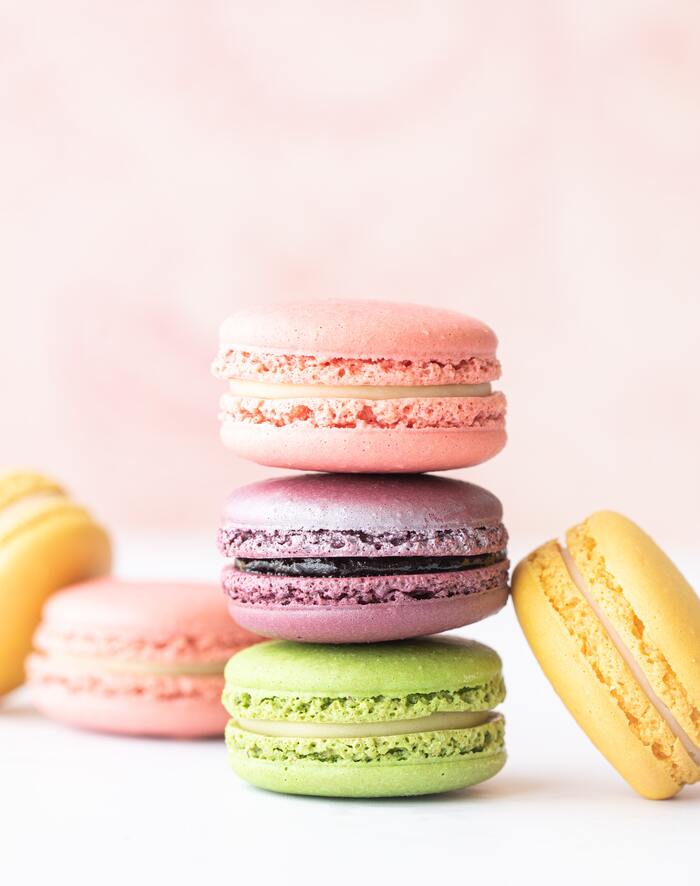 The Trader Joe’s lemon macaron wasn’t remarkably zippy, but a bright and sweet treat nonetheless! We were expecting a sharper curd for the filling, but the lemon flavor was somewhat soft and seemed to be laced with vanilla.

It was tasty, but it doesn’t kick you in the back of your teeth like you might want citrus desserts to do. They’re reminiscent of lemonade Girl Scout cookies. Except now, you don’t have to bite your tongue to keep from telling those optimistic young gals that all life holds for them is a series of disappointments.

Ladurée’s lemon macarons: This one had that lemon flavor we were missing from TJ’s. The curd was thick without being gummy, and packed a perfectly sweet and tart lemon punch that’d put any lemonade to shame. Pack up your stand, little Jimmy, you’re embarrassing yourself.

What is it about macarons that make us want to crush the dreams of young entrepreneurs? Eh, give us another. 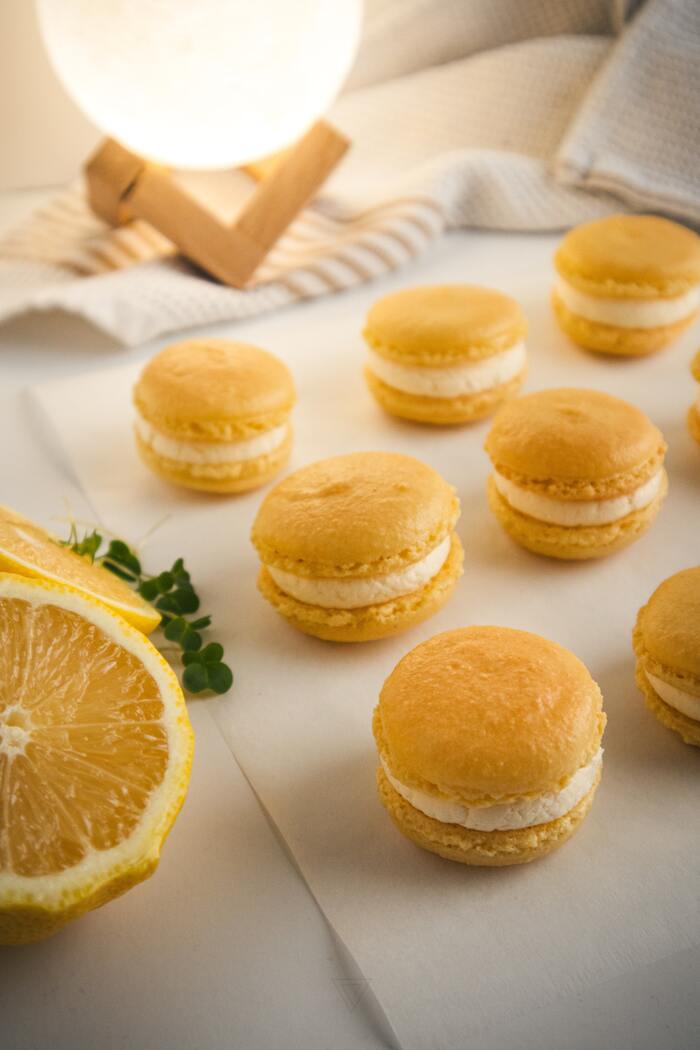 Either the shell didn’t have any flavor to it, or it was simply overpowered by the abundance of flavor in the filling. One way or another, this macaron tasted like a peach ring. You know the ones.

These macarons have the same flavor as the gummy snack, except you won’t have to chew them for 40 years. On the plus side, the pink and orange cookies give the whole thing a real Velma color scheme. How fun! But not enough to move it higher on this list. 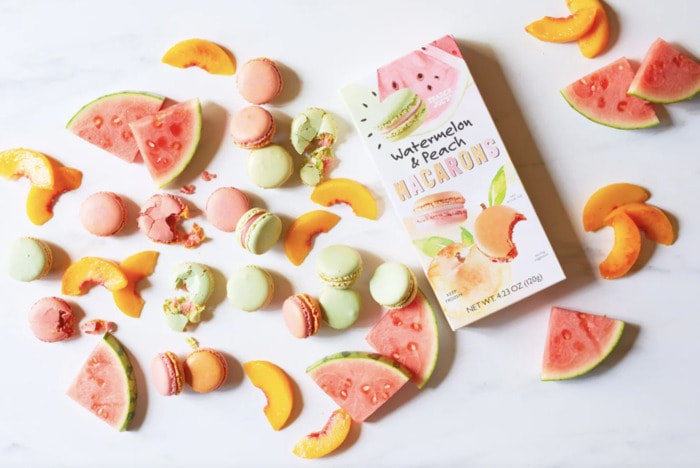 The taste is a dead ringer for those sour patch watermelon candies. If that’s what you’re into, then you’ll love these.

If you’re looking to get something that tastes like a watermelon, you should probably just go eat a watermelon. These don’t taste like anything that grows on trees or that you’d ever find in nature. But if they did then we might go camping more often. 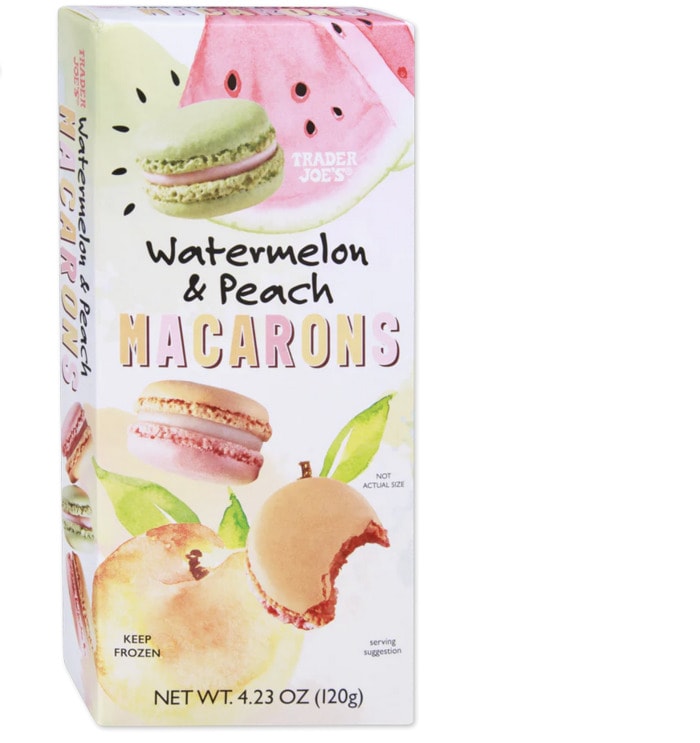 This Trader Joe’s flavor is definitely coconut-adjacent. There’s an identifiable coconut flavor, but its forwardness and the aftertaste is giving major coconut extract vibes. And then a few more for good luck.

It’s like the extract pulls you in close with a little wink-wink-nudge-nudge. Then it leans in to tell you a secret…and still says at a normal volume. It’s not bad, but it’s really not their best.

Ladurée’s coconut macarons: Shockingly devoid of coconut flavor. It also had a little zing to it, which actually had us thinking for a moment that we had picked up a lemon one.

They did add on coconut flakes for texture, so it felt a little more like eating a coconut than it did tasting it. We’ll take any excuse to pretend we’re lost on a deserted island instead of at work. 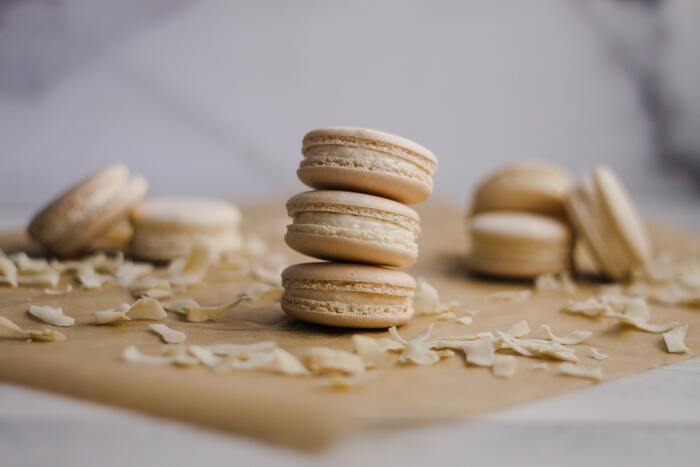 Now, this Trader Joe’s macaron doesn’t taste bad. It just doesn’t taste like…anything in particular? We spent a while trying to figure out which one it was before caving and looking at the list of flavors and using the process of elimination. Thanks, sixth grade science!

It’s pretty and orange, tastes perfectly fine, and it gave us a boost of confidence about our deductive reasoning skills. But we would lose a lot of money if we bet someone we could guess what it was. Can you tell we don’t go to Vegas often?

Some things sound too good to be true. Salted caramel macarons might be one of those things. We love the idea, but these tasted like those butterscotch candies you’d find at the bottom of your bag. Only with a more medicinal twist. We didn’t even eat the second one in the pack.

Ladurée’s salted caramel macaron: Not even the fancy chefs at Ladurée could save this one. It had less of an off-putting aftertaste than the Trader Joe’s version, but there was no hint of salt anywhere. Which it absolutely needed to keep it from getting cloyingly sweet.

Latest posts by Hebba Gouda (see all)
As an Amazon Associate we earn from qualifying purchases. This post may contain affiliate links from Amazon and other sites that we collect a share of sales from.
78 shares